I really do hate the extra commute to swim every morning. I'm trying to not but, I'm failing. The LA Fitness in West Seattle is not only closer, the commute is way easier - straight roads, fewer traffic lights, just easier. But, when I quit going there - 6-8 weeks ago? - it was because the place was filthy, the pool water was the consistency and color of split pea soup and the washing machines had been broken for a week so no towels.

Just now, I thought to check on Yelp to see if there were any new reviews on the West Seattle gym. OMG. Yes. Ha! Two very recent reviews revealed that the washing machines are still broken. (How the fuck can you run a gym without clean towels???) But, what's worse is that apparently on Monday, instead of opening at 5, no one showed til 5:45. On Tuesday, no one was there by 5:10 when the reviewer left. Can you imagine, getting up and being at the gym ready at 5 am and no one is there two days in a row??!!

The Ballard version is nice and clean and smells fine and has crystal clear pool water. Guess I'll just think of that while I'm on the road.

It didn't get daylight out this morning until after 8. Wild. Next week all will be different but for now... It's a cloudy stormy looking day.

Nothing carved in stone on the agenda today. I have new pants fabric to cut out. And lots of possible projects. I really need to re-organize all my sewing. I ordered one of those carts with drawers that will be here on Friday. I don't have room for it but I just have to get all these little bits into order so I can find shit.

I have yarn ordered for the new sweater but it won't be here until Friday at the earliest. So... I'm thinking it's time for a new bear. Tonight, for ballgame knitting.

That's what I spent for 20 Mariner tickets today. Whew. Interesting to buy 2018 baseball tickets on the very last day of the 2017 season. The Mariners (and probably all baseball teams) do this kind of fun thing for their first month of season ticket sales. They have 30 days of prizes starting today. As soon as you pay 20% of your ticket price your name goes into the prize bucket for drawing. The prizes are pretty handsome, actually. I'd love to win one. Also it looks like they are going to pay for my MLB At Bat subscription next year. Nice.

I've got a note into my sales guy asking about which games are mine. I found a list but I'm not sure it's the right one. I also did a deep dive into credit card cash back and discovered that Discover is the loser in this game. It would pay me .25% on the first $1,000 and then 1% on the rest. Capital One pays me 1.5% on the whole megillah. That's $80 smackers. Almost a whole inning paid for! ha. I crack myself up.

Also my sales guy says I can sell the parking pass that comes with each game. They are set up with Stub Hub. Mostly those passes go for $20-30 or more. Another little windfall.

One of my earliest memories was in our house in Kansas City (so before I was 6) when I was still forced to take naps in the afternoon. I really wanted some sandals and my Mother kept saying no. So one day, at nap time, I dreamed up a way that I could make myself a pair. It involved fabric and glue and cardboard. I drew out what I wanted to do and made a template of my foot.

After my 'nap', I found Mother and Daddy in the kitchen and announced that I needed fabric and glue and cardboard. Mom told me to get out of her way but Daddy was intrigued and asked me why and I explained and I showed him the template and the drawings and he dropped what he was doing and turned into Sandal Maker Assistant.

We made them just like I envisioned. I was so proud and so thrilled that Daddy thought it was a worth while project. I think they lasted a day or less but that so didn't matter. The whole thing is such a powerful and wonderful memory.

These days I'm rediscovering the joy of making shit. I never really lost it but I've also never really had so much open ended time to try stuff and do stuff and think about stuff and research stuff. It's heaven.

Today I cut out all the rest of the pants that I have the fabric for. Four pair actually. And then I put the pants patterns away. I'm ready to move on once I get them all sewn up.

Then I did some massive crochet research. I hit a couple of snags on that sweater and I wanted to learn how to not do that so I checked out a bunch of ebooks from the library and found the answer! And also found some other tips and tricks I'd never heard about before.

My new yarn won't be here for a couple of days but I have some that is very close in size and feel so I can try out my ideas on it and also get measurements so I know what I'm doing when the new yarn gets here.

Last night I gathered all my fleece scraps and cut out squares. 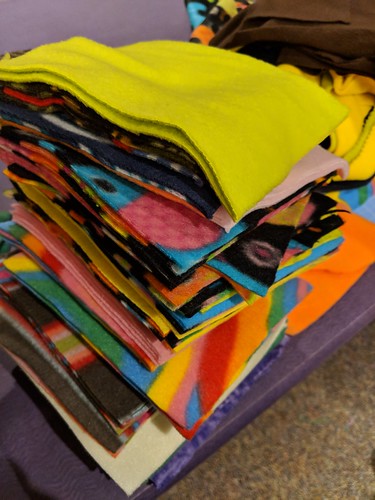 My plan is to join them all together and make this coat. 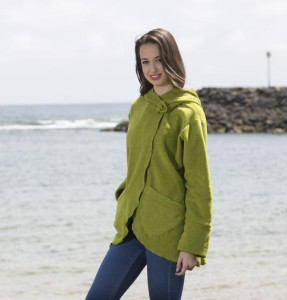 Tonight I'm going to cut squares out of my knit scraps that will, hopefully, turn into my patchwork pants.

I've got no sandals in the plans, though.
Collapse