Canada is sharing their smoke with us and, as a result, our air quality is the pits right now and getting worse. 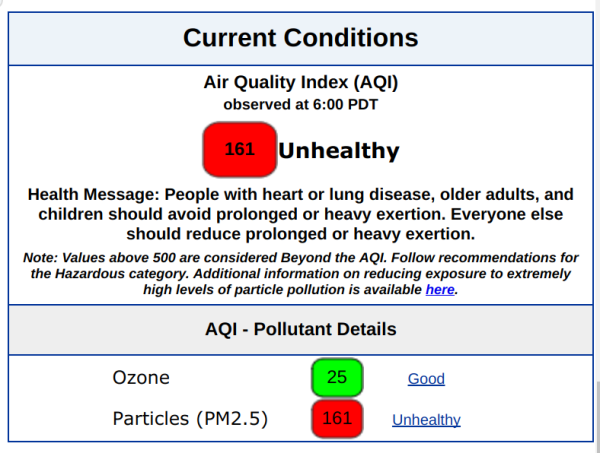 I have about half the lung capacity of the average woman of my age and weight. Soooooooo Yet another reason for not going outside. This morning, coming home from the pool, the air looked so bad that I rolled* up the windows and gave up on the morning breeze. The problem I have is that I can't tell, until it's too late, whether there's a problem on not. When I breath in bad stuff, it feels just like good stuff for about maybe 5 minutes and then I start the worst coughing imaginable. Dry, can't-get-my-breath-can't-stop-coughing hacking that feels horrible and sounds worse and won't stop. So rather than take a chance, I'll be staying inside today, thankyouverymuch.

It's fine. There's no place I really need to go outside this building anyway.

And in other Old People Falling Apart news, I upped my aspirin intake in hopes of shrinking my swollen foot (on the outside chance that it really is a blood clot). As a reward, my foot is still swollen but now I have a new blood bruise on my hand (and no memory of doing anything to cause it). Nice.

Our mayoral race here in Seattle had its primary this week. The top two vote getters go to the actual election for mayor in the fall. Right now, the top 4 vote getters are all women. I have to say that this really delights me. It will be a lovely change - I hope - from the mayoral mistakes that we had recently. My preferred candidate is holding the number 2 slot but only 66% of the votes have been counted so far.

Today's plans include... the condo security meeting at 10 and then the baseball game at 5. In between will be some sewing, some eating, some TV, some just piddling around. At least that's what's on the drawing board now.

For most of my adult life... All except the last decade really, I never lived the kind of life where having strangers drop in was possible. My house was always too messy. Not even dirty really, just messy. I had too much stuff and none of it was put away. Then I did a major purge and redecorated this condo and finally had a place for every stuff. It still took a few years to form the habit of keeping everything tidy.

Today I had 6 people in here. 4 of them have lived here as long as I have (25 years) but never been in my place and 1 is new and 1 is the consultant I had never met. I did nothing but open the door and welcome them in. It was like checking off a big item on my adult list. After the meeting, two of the people stayed behind to ask 'who did your mural, where did you get this piece, what's the story behind that one? Ohhhh, I love this...' it was very cool and very gratifying. I was pretty proud of me.

The meeting was actually pretty interesting. All of the people present brought relevant, creative, interesting ideas to the table and no one was a pill at all. It was good. And cool. The air conditioner is really working hard and doing a great job.

After the meeting, I had lunch and I made a rabbit. I didn't have anything big cut out and I figured it would soon get too hot in the sewing room (and I was right) so I made a quick bunny. 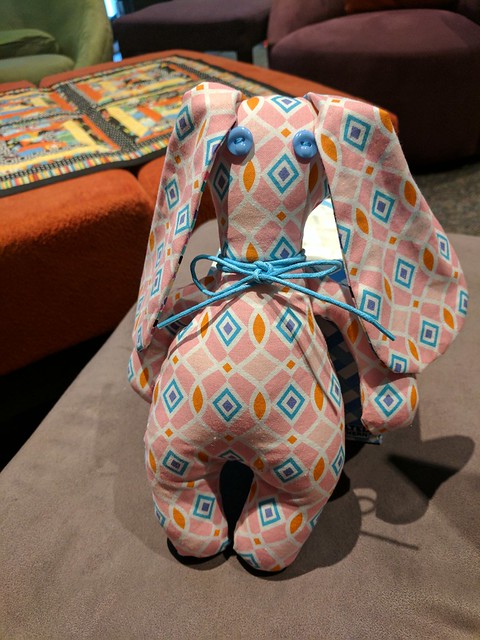 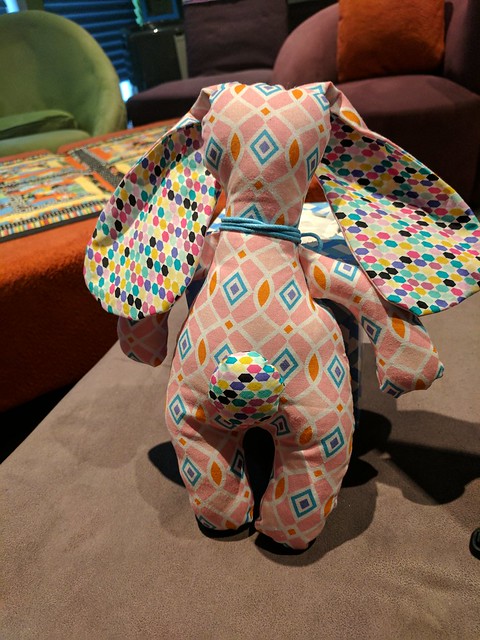 And I have cold fried chicken with cottage cheese and apple sauce for dinner. Yummy.
Collapse