This morning's swim was the best. Some day's it's a slog. Yesterday was one of those days. My goal is to swim a mile a day. If I swim for an hour, even at my slowest, I know I will have covered a mile. So I get in and go until an hour or a little beyond (for safety) is done. It's a made up goal and a made up way to get there. There's no reason for any of it except, I do think it's cool to know I swim a mile a day.

Anyway, yesterday, I felt like I had been swimming forever when I looked at the clock and hit had only been 30 minutes. The second half hour went by with the speed of a traffic jam.

Today was just the opposite. I looked at the clock expecting to see that 15 minutes had gone by and it was 35. The water felt especially good. The tunes were just the right ones. It was just good.

And, while I was swimming, I decided not to do the sewing project I had planned - another test of the new pattern. I think I'm going to save the rest of the sheets for a different top. I'm going to dive right in and make the pattern out of fleece which was my intended fabric. I want an around-the-house fleece cardigan. I have one that I got last year at Goodwill that I really liked but it had a really annoying collar. This one has a nice, soft rolled collar and big, roomy pockets. Plus, better color - and maybe colors.

But, first, some errands. Library, vote drop off, grocery?, office depot, gas... The library is just a drop off so I don't have to wait until they open. I think I'm going to head out now and get this all done so I can have the rest of the day for whatever.

I still have to attach the collar but the jacket/sweater is exactly what I wanted and fits me perfectly.

I ended up pulling all the fabric stash out of the closet and then restacking it in a way that I can tell what's in there. I ended up making the jacket out of some minky I found. That stuff is such a bitch to cut and sew with. It sheds all over every thing but it is so soft and cuddly and that's what I wanted. So I figure I'd use it up and never buy any again. I'll make one out of fleece, too, probably.

I got all my errands done and even remembered to get gas. By the time I got home I was fried. I love my air conditioner so much.

I picked up some heavy paper at Office Depot and the plan is to use it for the patterns I reuse most often. My swimsuit pattern, for instance, is a wrinkly mess. If I had a place to hang them up, I'd make them out of oak tag and get all organized like this: 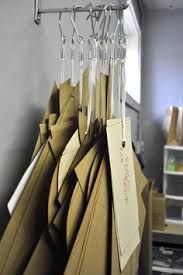 Maybe this should be incentive to clean out my hanging closet. It sure could use it.

Baseball tonight on TV at 7. Maybe I'll watch a Suburbian murder before dinner. Yesterday, I watched an episode where Mrs. Hughes from Downton Abbey played the victim's wife. It was pretty disconcerting to see her in modern clothes with dark brown hair.
Collapse