A week or so ago, a really hunky young guy in the pool asked me about my swimming - how often, how long, etc and complemented me on my dedication to it. It gave me an 'I'm soooo cool' glow for days. Well, check it out. The glow is back. Today, after I was showered and dressed in street clothes and on my way out, I passed him doing floor exercises and he stopped me to ask more and tell me 'Way to go!'. The guy clearly has a thing for me. And I'm totally fine with that.

No sun out yet this morning so it's lovely and cool. And it looks like all the mornings this week will be that way. So nice.

Today is my last day of prednisone. Last night I slept badly like they warn you prednisone will cause but it never has with me. And this morning my cough was back a little. I think I'm ready to be off drugs now. I still have a few more days of antibiotics. My worry is that once all the drugs are done, my lungs will be unhappy and we'll start down the old COPD rabbit hole again. But, borrowing trouble... yadda yadda.

Today is Mariner blouse day. I'm trying some new things on woven fabric (which I rarely use for making clothes). My plan is to take it slow and easy and do a lot of finishing work. I have lots of podcasts stacked up to listen to/watch while I work so the only issue will be keeping it cool back there in the land of no air!

My new swim suit fabric is due to be delivered today.Thank you father's day sale at Spandex World.

Oh and I want to trot up to the little national park (Klondike Gold Rush) today and buy a senior pass. It is very likely I will never use it but, old people can still get a $10 pass to all national parks that's good for life. The price is suspected to go up to $80 by the end of the year. So I figure, it's worth $10 just in case. Plus, supporting old peops, you know. And I need a walk today.

I ran into Sandy, the HOA president today. When I saw her last week and complimented the interim guy she said he wanted the job but she was afraid he was not up to it. Today she stopped to tell me that she'd had 3 crises this week so far and he had been a massive help in all three. "He stops and thinks and then does!! It's amazing. Really. You were right. He's good. And I'm so grateful." So cool.

He's already corrected 3 things that the former manager fucked up daily and he's still just interim. I'd love to see him win her over entirely and get the job. I love the fight for what you want with smarts story.

My Mariners shirt turned out fine and dandy. It wrinkles fast and probably isn't going to be nice a crisp after a bunch of washes but it will absolutely see me through the next day games. In fine style. And with a shirt like no other. 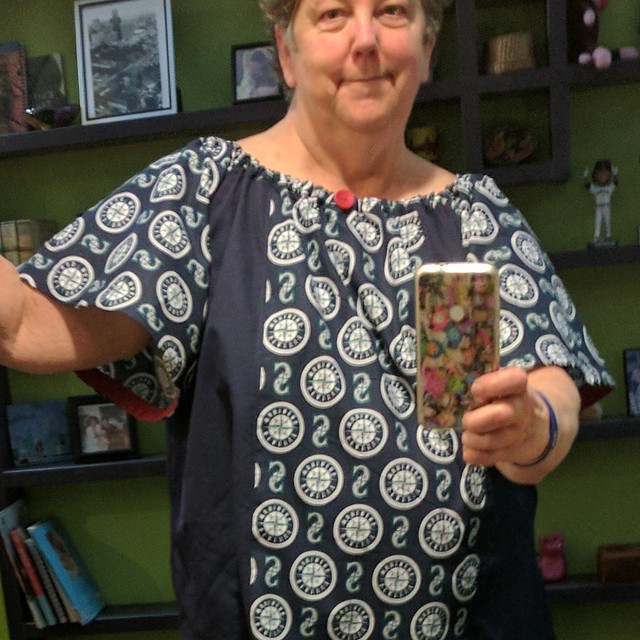 After I was done and got everything cleaned up I remembered I needed something salad-y for dinner and had planned to go to Grocery Outlet. There's a home game tonight (and GO is on the other side of the stadium from here) and it was getting late in the day but I chanced it. I discovered that it's way cooler outside than I thought. There's a lovely breeze. I got my goods and got home without a problem. Whew.

Sadly it's a home game and Tuesday so after the 3rd inning, the asshole former player will ruin the broadcast but I figured out I can watch it on my tablet on mute with one eye and watch something else on the TV with the other. It will be fine.

Oh and the swim suit fabric arrived and is way better than I thought it would be. New suit tomorrow probably! I need a win after the last suit failure.
Collapse