I am a big fan and a financial supporter (ha!) of Amazon. I interviewed with Jeff Bezos for a job there before their website went live. I have spent so much money at Amazon, I would not have the nerve to look up the total. Just yesterday, I spent $400 on their latest gizmo. No one I know has even seen it and I won't get mine until the end of June at the earliest. I love Amazon.

Today I love them more. Seattle has a large network of homeless shelters particularly for women and kids, called Mary's Place. I support them, too, by having Amazon deliver tampons and sanitary pads every month. Today, I learned that Amazon is giving to Mary's Place, a giant space - 6 floors in their new office tower in the center of downtown Seattle. Rent free with all utilities paid. Forever. I love this. It's like when your two best friends meet and find instant rapport.

The music festival starts tomorrow so today is my last day to go to and from my garage and really my house until Sunday. I need to go to Safeway and I think I'm going to combine it with a trip to a fabric shop in Fremont (a neighborhood north of here). The house cleaner comes today so today's a good day to do it anyway.

The only catch is that the Mariner's game is at 10. Do I put on blinders until I get home, hoping to avoid seeing the score and watch the recording of the game? OR do I listen to it, in spurts in the car? hmmmmmmmm

Yesterday's adventure with Sandy's mesh network was interesting. It was fairly simple to set up but it was not very meshy and I wasn't impressed. My Eero has 3 pods all of which are the same. The one you attach to the modem is the lead guy but the others deliver nearly as powerful a signal (and provide ethernet ports). The kind that Sandy got had one main unit and two antenna-ish units. The main unit was fine. But the antennas did not appear to even carry much of the signal at all. I know that mesh networks do take a few hours - maybe as much as 24 - to settle into their full power and I explained that. She agreed to let it be for 24 hours but also decided to order up Eero's just in case. And she did.

She's going to call me when the Eero's arrive today (thanks, again Amazon!) and we'll revisit. She's an all Apple house. I know nothing about Apple. But that turned out to be not a problem. They (she and Tija - Tija owns the gym across the street - she and Sandy have been together for about 23+ years now) have beautiful artwork in their home. Some truly amazing pieces. I need to take some pictures when I go back up there today. It was/is fun to do something for her - she's done so much for this building community.

I finished the most interesting book last night. American War by Omar El Akkad. Set in 2075, it's a fascinating look at a United States of the future - one at civil war. It really is a great story and it made my brain stretch to imagine it all.

Now I need to go figure out why last night's Windows update will now not let me use Chrome as a browser on my Lenovo laptop. I thought for sure I had turned off automatic updates but, apparently, I did not. GRRRRRRR

In March 1984, I turned 35. I lived in a rad (well, we didn't say rad back then, but we would have if we had known about it) condo in downtown Charlotte with a waterbed and I had a great job. What to give the girl who has everything?

IBM knew. That very month they came out with the IBM PC jr. They had just opened up one of their IBM Product Stores. Yes, long before Apple Stores or Microsoft Stores, IBM had stores, too. (I still have a shopping bag from one of them!) I marched in and bought myself a computer. 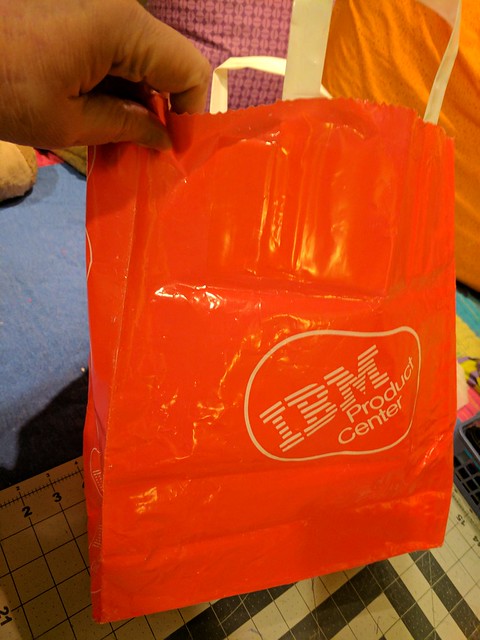 When it first came out, the PC jr, was a CPU, and a keyboard. The keyboard was infrared wireless which was space aged at the time. There was no disc drive, no monitor, no mouse. The software for it came on cartridges that you shoved into the CPU. It came with a cable that you plugged into the TV for a monitor. I set it up on a table across from the end of my bed and I used to lie on the bed on my stomach with the keyboard pointed to the CPU and play for hours.

There was very little software initially. It came with very basic Basic built in and you had to buy DOS (2.1) separately. I did and spent the first months just going through the DOS book and doing each command and learning how to use them.

And then Sierra software came out with a game cartridge - Kings Quest (written by a woman!) and I played that for hours/days/months on end.

I got very creative with the hardware. I had a little 5" black and white TV along with a 11" color TV on the desk. I added a switch box so that I could use either one for a monitor and easily switch between the two. So I could be watching a baseball game, for instance on the little screen and if the action got good, I could quickly flip it to the 'big' screen.

I had that coupler modem still from work so I hooked that up. And got into the mainframe at work. Some of the sys admins there told me about electronic bulletin boards. I would log in using the name of Susan and I was swarmed with friends. They were all teenaged boys so thrilled to be talking to a girl. And they were also very patient and kind and served as my computer science education. They taught me everything and kept me well entertained.

Eventually, I upgraded the modem to 1200 baud and then a blazing 2400 baud. IBM came out with a real monitor for PC jr. and I added that. With the help of my EBBS friends, I added a disc drive (5.25") and got a dot matrix printer. It was a Frankenstein of a beast and I loved it.

I got tired of waiting so I left before the house cleaner even got here. I found two nice knits at the fabric store and bought enough for one long sleeved t-shirt/sweater and one short sleeved one. I started on the long sleeved and it's going to be so nice. I got as far as the neck and tested out a finish that I don't like so tomorrow I'll do Plan B.

It's very warm out today but starting tomorrow we're back to long sleeve weather for a few more days so I'll enjoy having it still this season.

Then I went on to Safeway and got everything on my list. And, by the time I got home, the house cleaner was done. She brought me some kind of small casserole which looks pretty darned good so dinner's set.

I watched the game when I got home and it was a good one. I was glad I waited.

An LJ comment conversation I had last week, led me to purchase the first book - tree killing paper book - that I've bought in years. It's a book I read when it first came out in 2003. Eugenia Zuckerman gathered essays from famous and not famous women about their memories of their mother's closet. I'm not big on essays or compilations but this one grabbed me when I first read it and I'm delighted to have it again. PLUS the copy I bought was used and there is a wonderful inscription from a daughter to her mother on the title page. The daughter apparently read it when it first came out and immediately gifted her mother with it and a very sweet note. So cool. I can't wait to read it cover to cover again. I have such wonderful memories of my own mother's closet.

Sandy's new router came in from Amazon and I went up to redo yesterday's do. Only this time, with completely different results. We first tested the speed. Dismal - 15 up 3 down and that was standing next to the router. She did not know what kind of speed she was paying for so she called Comcast. 200. Ok. We unplugged the Amplifi system and plugged in the Eero. She bought the 3 pod set. We plugged in the first one and fired up the app. Time from app download til network set up was 5 minutes. We tested it. Over wifi we got 183 down and 87 up. She nearly peed her pants in excitement. Printer works, external backup drive works. The first one is in the office, we put one in the living room and one in the bedroom. All working fine with blazing speed. She is one happy camper. Whew. 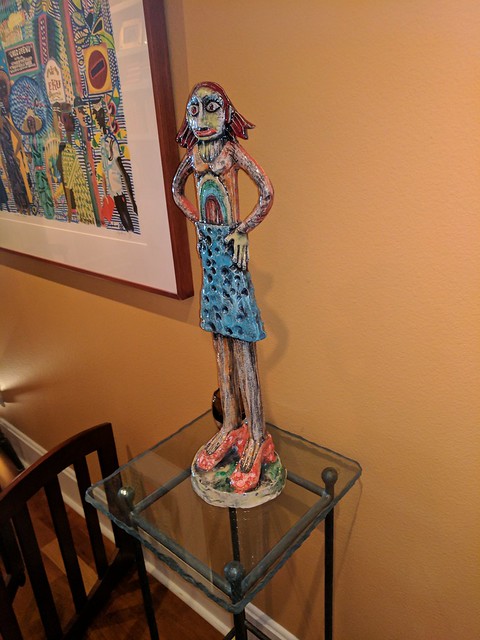 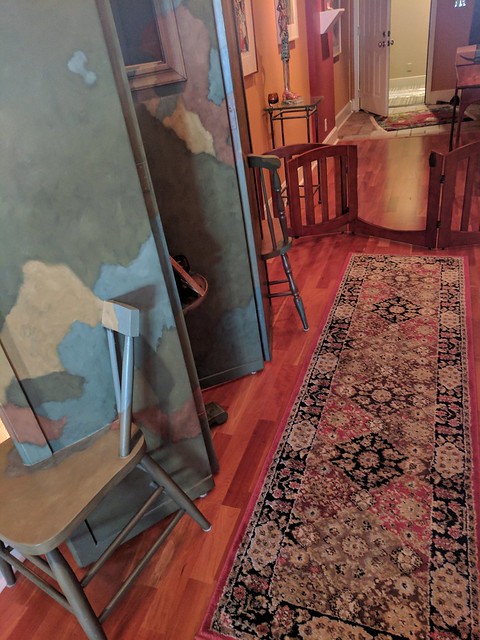