The pool, this morning, looked like your basic Monday when everyone decides "I'm going to swim every day this week - first thing." Their resolve folds by Tuesday. But, yesterday's May Day-ism put Monday on the back burner and made today a very busy pool morning. On the up side, the water temperature was perfect after about 5 days of too warm.

My car appointment was at 7 so I swam until 6:30 and got to the Mercedes place at 7 on the dot. All went very smoothly. He outlined the stuff he had on tap and agreed to have me some kind of transportation tomorrow morning at 5 so I could get to the gym. He's sure it will be my own fixed car. The tab is going to be about $1,500. Which is a bite BUT not so bad when you consider that in the past four years, I have only bought gas for that car and spent $0 on any other kind of fix or maintenance.

The shuttle drive brought me home without any annoying chit chat. All is good.

From time to time someone with a Cyrillic Live Journal adds me to their friends list. It's fine by me. I usually look at their journal and then move on. But, a while back, the someone had some interesting photos so I added them back. They don't post much and while I can run the words through a translator, I usually don't. This morning and entry popped up and I did not translate it, but I LOVE the photograph. It's public and worth a peek.

The new kitchen counters project is still in stall mode.

pinmedown told me about a website/service I'd never hear of - Thumbtack.com. It was easy peasy to fill out a request. I specifically asked for help purchasing and installing a laminate kitchen counter. I only got one estimate - from one of the places I tried yesterday! - and it was for $50 a square foot granite or quartz. Sigh. I sent an email today to another place. And the hunt goes on.

It's ok because I also have to replace my hot water heater in a few months. I use very little hot water since I never shower here, don't run the dishwasher and wash my clothes in cold water, but the condo requires replacement every 10 years (which I wholeheartedly support). My rainy day fund is going to need a new umbrella. I hope Trump lays off the tax reform that would remove a deduction for home improvement next year... I'm going to really cash in on that sucker.

OMG, I just saw on Twitter that Come From Away got a Tony nomination for best musical. I saw it in Seattle before it went to Broadway. It was absolutely amazing in every way. It deserves a Tony and I'm so delighted to see it get a shot.

Ok, time to get crackin'. I have a couple of dolls cut out and waiting to be made live.

I think I finally found my countertop fixer. While I was on the phone with him, I got another call coming in. I sent it to voice mail. By the time Countertop Guy and I finished, I had a voicemail transcript in my email. It was my financial adviser telling me that due to a snafu on his end, the $1,500 monthly draw off my investments would be double this month.

My rainy day fund is putting away the umbrella and doing the happy dance.

Countertop Guy was MOST helpful in giving me info. He won't be free to come give me a consult for a couple of weeks. I told him that even June was fine that I was in no hurry. He gave me a bunch of websites to look at and told me to go to Home Depot and Lowes and look at their options.

He even identified (from my pics) exactly what I have. I like what I have in terms of color and durability. It lasted 25 years! And he suggested some other options like livingstome and Corian.

I promised to do my research and nail down what I liked and didn't like before we talked again.

When I called my financial adviser back I told him that the reason I couldn't answer his call was because I was already working on spending the extra $1,500. Hahahahahaha

JUST kidding. I'll use it to pay for the car repairs.

Today's entry is a mishmash of random memories from the years when I was married.

The first is the worst. I had not spent a whole lot of time in Charlotte before I moved there. Actually, thinking back on it, I've never moved anywhere I was familiar with. But Charlotte was the worst. The law firm wasn't that far from my house but between the two was a rather large, busy intersection of Queens Road and Queens Road. I remember coming home one night from the job I hated at the law firm, to a husband who was nothing but frustration. I was so tired and I made a wrong turn at the intersection and got lost. I finally just pulled over to the side of the road and cried for about 30 minutes. To this day I don't ever remember feeling as defeated as I did that night.

And, happily, I got some coping skills plus there were other treats. One night I had to stop by my husband's editor's house to pick up something for him. It was about 6 pm and his wife answered the door. I knew her but not well and didn't particularly like her nor she me but she invited me in while she went to get whatever it was I had come for. I stood in the living room and saw that one of my favorite soap operas was on the TV.

WTF?????? That soap opera was aired only on weekdays at 1:30p.m. How the fuck was she watching it at 6????? "Oh it's our new Beta Max. We tape programs like on a tape recorder and play them back whenever we want."

My life changed in that moment.

I bought one that weekend. It had a remote control which was a BFD. Our TV didn't even have a remote control. The remote for the Beta Max was not wireless however. So, every after every single program we watched was peppered with "Watch the cable!" But, I loved that thing. I recorded everything on TV and watched it on my time. I didn't even ever rent a movie until years later. But, from that time on, I have always always had something connected to my TV to record shows.

One evening I came home from work and the front door was ajar. My husband's car wasn't there... His big assed stereo speakers were in the hallway. Was he leaving me? I swear that was my first thought. But, then, I noticed some other stuff ... we had been robbed. Apparently the robber got interrupted mid-heist and only got the stereo and not the speakers OR the TV and Beta Max (thankgod).

My husband's accordion was in the closet right there in the hallway. I was pretty bummed the thief didn't find/take that. There had been a spate of burglaries in the neighborhood, the cops told us, and added that we had gotten really lucky they didn't take more. It was a creepy experience but the cops that came were darned cute.

And finally, one of the best memories of that house was my first nephew. When he was 2, my brother and his wife had son number 2. My Mom flew out to San Diego and brought Alex back for a visit while the new baby settled in with his folks at home. Charlotte was the closest airport so after he picked them up at the airport, Daddy brought them by our house to rest up before the ride home.

The 2 year old had done well on the flight was was clearly ready to rock and roll, stumbling around our living room from adult to adult. Until my Mom got up to go down the hall to the bathroom. The minute he discovered her missing, he lost his shit. He went running down the hallway screaming for her. He was using a specific word but we couldn't really make out what it was. All we knew was that it sounded like Monkey. MOOOOONNNNNNKKKKKEEEEEEYYYYY he wailed until he saw her again and then was all smiles. 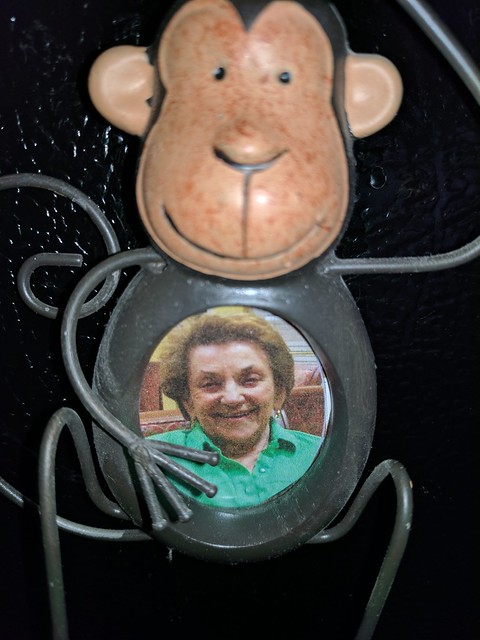 From that minute on, every one of their grandchildren called my mother, Monkey. They called my father Popeye but I honestly do not have a clue where that nickname came from.

(Alex is now a 37 year old psychologist working with troubled youth in Massachusetts and has a lovely wife and two extremely cute little girls.)

The car is done. $1,558. And I'm so pissed at myself. I have a $100 off coupon which I tried to use last week and couldn't because it was for a $200 or more charge and my charge was $186. And then today I totally forgot. I had a receipt in my email from the dealership when I got home so I replied to it and asked and just got a note that they were checking into it to see what they could do. All I can ask.

[EDIT 30 minutes later. I just got an email from the dealership - a receipt for $110 credit on my credit card.

It's going to be hard for me to stay pissed at them at this rate.]

And, once again, they cleaned the thing cleaner than when new. The guy in charge said to bring it back next year. It's at the age when an annual checkup is advised. Me and the car. Same month every year. I like the synergy of that.

Yesterday's folly was trying to get a video uploaded to Instagram. Got that fixed. Now there's a problem with the audio. It sucks. It does not suck when I do it from my Nexus 7 tablet. But it sure does from the phone. I've scoured the internet looking for an answer. Finally I left queries on Reddit and Google Forums. Usually both provide fast answers. So far, crickets.

I only got one doll made but I like her. 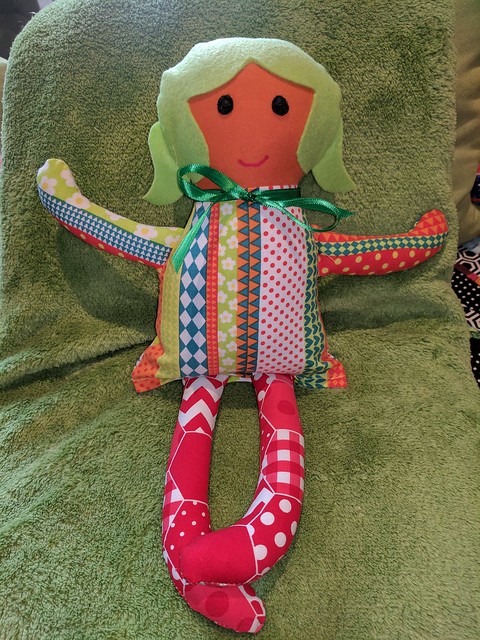