My new inhaler is absolutely working in so far as breathing is as easy as if there were no COPD. However, I just had a coughing fit that was concerning. Now, is it the new inhaler? Or just an every day coughing fit that I would have regardless? I have no clue. Time will tell? A week. I'm going to stick with this a week. At least.

I just killed an hour on my insurance company's website trying to ascertain a financial reason to keep or switch. The new one will cost me $849 total this year. The old one, according to the same form, will cost me $16,473 total for this year. I'm thinking the latter is likely a data sneeze. Finally, I just sent an email asking. I'm sure the reply will be - call us. Their site also says that the $94.00 I paid this week for the new inhaler should have been $47. I sent another note about that.

Comparatively speaking navigating the financials of old people health care in the United States is a lot easier than most and at least my new insurance has lots on online information BUT, it's clear that one needs to be retired and/or for other reasons have copious free time to research and figure out what they fucking mean.

At least all the research, clicking, figuring, writing has now lasted long enough for my coughing fit to completely clear up!

Today is definitely a grocery store day. I used my last tortilla today and it had already passed its prime. So I'll head out here once the morning rush traffic is through and get that done.

I started school when I was 6. There was no kindergarten or pre-school. We went from 0 to first grade. I was so ready. OMG. I was dying to go to school. For my birthday, when I turned 6 in March, I got a book bag with a Big Chief tablet and the fat pencil that all children of the 50's learned to write with. It was still 6 months before school. And when you are 6 years old, 6 months is really forever. I wanted to find out what the hype was about. I wanted adventure but mainly going to school would cement my superiority over my bother and sister. It was time they learned who was the grown up in this three some.

It turned out that they hype was hype. I really did hate school. I finished 16 years of it but never again felt like I did those 6 months before my first classroom.

It was during my first few months of school that Daddy got yet another promotion and we moved again. This time he was made sales manager and the move was to headquarters in Winston-Salem, North Carolina. We bought our first station wagon for the trip. We stopped at Momoo's and Popoo's for Christmas and then just kept on going until we got to our new lives.

My sister was not happy about the move and whined the entire way. Mother made the mistake of telling her that she would forget Kansas City in short order. We heard "I haven't forgotten Kansas City yet!" every hour for the entire trip.

In between, we were schooled in how to live in the South. We would start, immediately, replacing every Yes and No with Yes Ma'm or Yes Sir or No Ma'm or No Sir. No exceptions and every slip was admonished immediately. It was painful.

When we finally got to North Carolina, turns out Mother and Daddy had bought this HUGE two story house that was like a castle to a 6 year old. (It was huge to a 6 year old. But, it was average size to anyone else. Not nearly big enough by the time we turned into teenagers.) Before we moved in they took us to see it. There was no furniture and it looked cavernous. My sister and I got to pick out our own rooms. The room I picked out had been an open air roof terrace that had been closed in. It had 6 windows and each was lined with beautiful white billowy curtains. 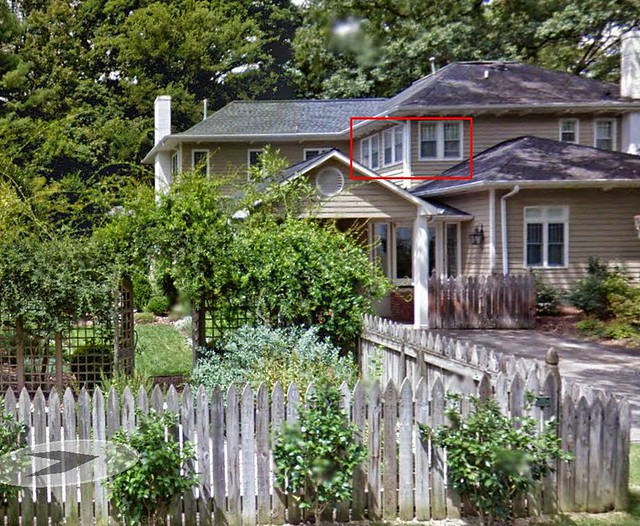 Google gave me a great shot of my bedroom - outlined in red. The carport wasn't there and my room looked over the back yard which was wide open to the street. And when it was our house, it was white. But, clearly it's outlived all the punishment we gave it! (It has also grown considerably. I think, judging from the real estate description, they must have built out the basement substantially.)

The truck with our stuff arrived and we moved into the new house. When we got back to the house, someone had removed all the beautiful curtains. I was crushed to bits. But I learned to love that room. It was my domain for the next 8 years.

The deal with Universal Yums is that they send you an email with the tracking number. They use a slow version of Fed Ex Smart Post so you get the email about 10 days before you get the yums.

It's quite ingenious and only adds to the joy that is Universal Yums. Today my box arrived and it is Israel! I felt like I should tape it up and send it on to

belleweather to tied her over until she knows whether or not she's actually moving there. But, fortunately, the feeling passed quickly :)

Each box comes with an elaborate 'what's in the box' guide explaining what the treat is and why it was selected. I just had the Chocolate Mint Log. Pretty good! 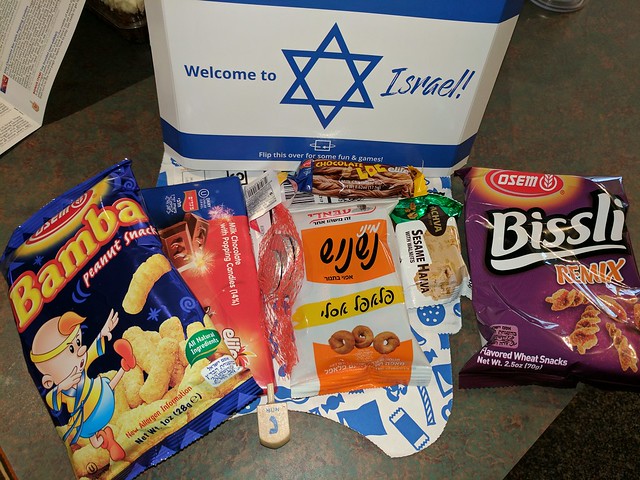 After I got home from the grocery store, I sat down to catch up and all of a sudden I was terminally sleepy. So I slept for 30 minutes. And I've felt perfect since. Weird. Very.

So I didn't hit the sewing room until late and started with fixing a pillow case. I like my cases envelope style and I found one this morning that had not been upfitted so I did. 2 seams. I sewed them both incorrectly and so undid them and then redid one wrong again. I was like a master fuckerupper. Finally got the case done and then realized I needed more doll faces before I make more dolls so I started on that. I'll finish tomorrow.

Turns out, as much as I'd like to be, I am not smart enough for the NY Times crossword puzzle. Mondays, maybe but mostly not. The rest of the week, NFW. But,

legalmoose turned me on to their mini puzzles and to those, I am now addicted. My latest treat is to check in the late afternoon and find that I have not yet done today's!

I made some macaroni and cheese the other day with velveeta. It was good but there was way too much. Last night I put some cream and butter into a baking dish and added some of the leftover and backed it for about 30 minutes. OMG was that good. I am going to repeat that for tonight's dinner. I got some really pretty pork chops today and one of those will share the plate.

Time to get to knittin'
Collapse