This morning's swim was with 3 regulars - 2 of them swim Mondays and Wednesdays and the 3rd is about 3 times a week. I don't know their names but I know exactly how they swim and I know the girl on my left will start her apres swim stretches at about 5:55 and the one sharing my lane only swims 20 minutes and the guy on the right will swim until 6:10 and then dry off and put on his street clothes right there by the side of the pool.

There's something really comforting about sliding into the water and starting your first lap surrounded by 'friends'.

Today's big agenda item is my now annual visit the lung doctor. I expect it to go

$50 copay and I'm out. It's highly likely that unless I get hit by a bus, at some point my COPD will progress to the point where he and I see a lot of each other so I'm perfectly fine just giving him a base level now and banking some good will for the future. He's a nice guy and I'm glad to have him in my court.

I don't need to leave for my appointment for another two hours so I think I'll get some chores done and maybe some sewing started.

My father's father was a special in many ways. Popoo was born in Germany. He quit school and ran away when he was 16 and joined the British Navy. He worked on sailing ships until the war broke out between Germany and England. He and a German buddy had no clue where they were (neither spoke much English) but they knew their choices were to jump ship or be taken prisoner. It turned out they were in Galveston, TX. Popoo got a job with the Frisco railroad where he worked his way up to engineer (the only one without a college degree) and a Frisco man for more than 30 years until after his first heart attack, he finally retired.

When we were in Kansas City, he was in charge of the rail yard at Chaffee, MO. He was amazing in every way. He had a thick German accent and thought his grandchildren were the biggest treat on the planet. He acted accordingly. He was as jolly and fun as his wife was dour and mean.

He was a massive tease and always always ready to play. My sister was a hypochondriac and was always dying of some ailment. Popoo used to tell her that as soon as it was 10, 2 or 4, he'd call Dr. Pepper. Cracked me up. 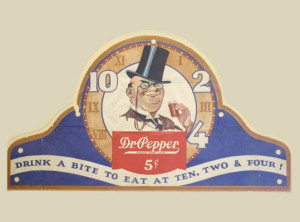 They had a small koi pond in the backyard and every night after dinner he'd make like he was stealing bread from Momoo and gather us kids up to go feed the fishes their dinner. It was the best time of the day (well, second best for me - after my downtown visit).

He did have a dark side - at least dark to me. He was astoundingly prejudice. Odd for someone who was a stranger in a strange land himself. Momoo was even worse. And some of that my Dad never managed to shake. He would never watch ABC News because Peter Jennings (a Canadian) refused to become an American citizen.

But, mostly Popoo was amazing. When he retired he got a typewriter and wrote. Letters. To everyone. Constantly. I got lots but he also wrote to Sonny and Cher complaining that Cher was exposing too much skin on their TV show. He wrote to Eugene McCarthy when he ran for president in 1968 "Dear Senator McCarthy, Should you become president (god forbid), I want..."

It was my Mom who suggested that in between letters, he write the story of his life for all of us to read and... he did! He wrote it in his own German accent - 300 typewritten pages on onionskin paper. From birth to death edited in hopes his grandchildren would have more sense than to drop out of school and run away from home. Years after he died, Daddy asked me to retype it onto better paper and clean up the language. I tried and failed. I did retype it but cleaning up the language was just beyond me plus, his own words were so cute. Daddy had it bound. A copy for each of us. It is a treasure.

Momoo and Popoo had 2 children - Daddy and his older sister, Kay (Karolene - yep, that's where they got my middle name). Kay was married to Ray and they had Bill - my only cousin. Bill is 6 years older than me and lives in Oklahoma City in this house his Dad built in 1950.

Daddy always thought that Kay married beneath her. Ray was (literally) a lineman for the county. He was a giant man with a kind heart. Kay wore frosted nail polish and doted on me and my sister. She once gave me a permanent wave without asking my mother. I thought blood would be shed when Mom found out.

Cousin Bill lived with us one summer. Daddy was always trying to make him into something Daddy thought was better. Bill resisted nicely. I was 15 and cousin Bill and I spent the Summer as pals. He trained as a union electrician and has worked commercial jobs in Oklahoma City for years and years and never married. His folks both died years ago. After Daddy died, I am the only one who has ever had contact and that has been very sparse. I'm pretty sure he's not dead.

I barely had time to log into the clinic's free wifi before the assistant came out to get me. Then it was blood pressure, oxygen and pulse - all in the freakin excellent range. And then there was Dr. Lung. Who was really Dr. Chatty today. He spied my phone case and asked about it - it's a collage of the dolls - and then had a million questions about the doll making. I felt guilty. I kept steering him back to lungs but it wasn't easy.

He asked me a bascillion questions about swimming and breathing and coughing and stuff. He's so patient and kind. He suggests a new inhaler that will replace the two I use now. The new inhaler costs as much as the other two but I only need the one so net net would be half - I hope. There's no way to know for sure until they ring you up at the cash register.

So I suggested we try it for a month. If cool, then I'll get the prescription for a year. The whole thing, including the wait at the pharmacy took less than 30 minutes. Of course, the pharmacy didn't have any on hand. Tomorrow after noon. And there was no mention of a follow up visit. Freedom!!

On the way home I was starving. The clock said 10:15. Why was I so hungry??? I was all the way home before I remembered that I had not reset the car clock cause I was going to adjust in my brain. That's working out well.

So now I've had lunch. No baseball today. Time to make a doll.

This turned out to be a lovely and productive afternoon. Two new dolls and a bear finished. Plus, here's a bear from Sunday that I forgot to share.

Tonight I have a new episode of The Good Fight and Madam Secretary. I think I might just watch one and save the other for tomorrow. 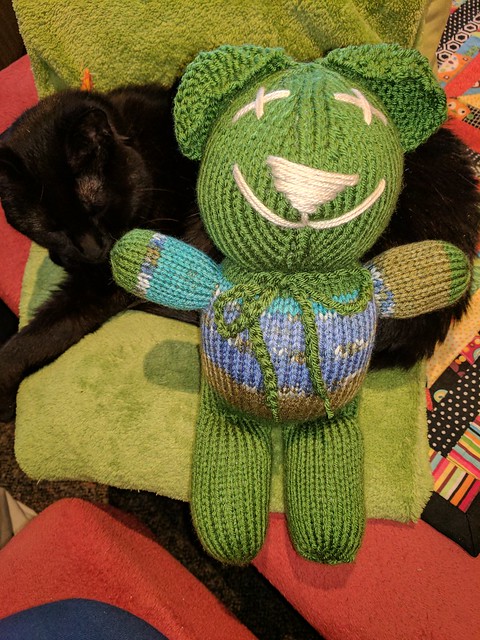 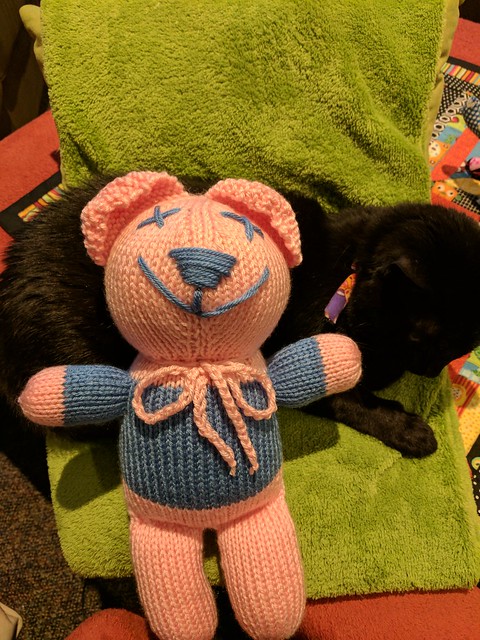 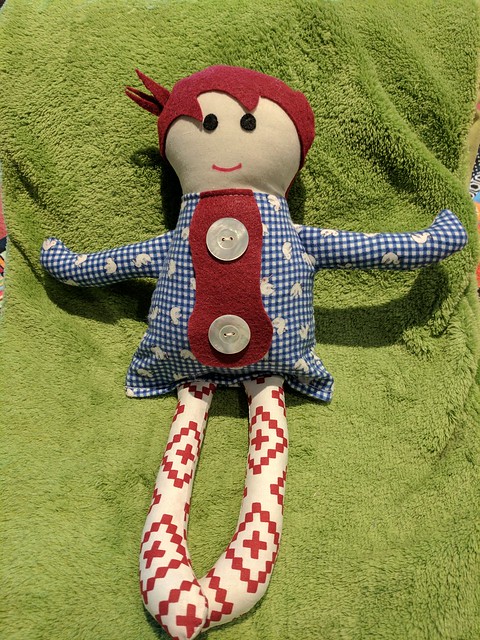 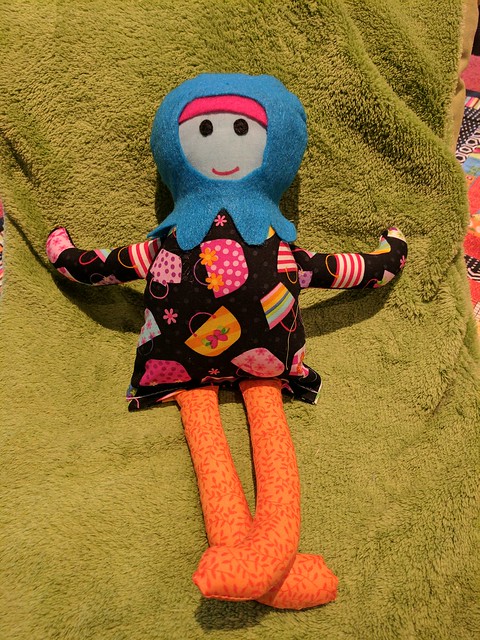