When I got divorced shortly after I got married, I gave myself several presents. 1. The life of a single woman 2. My first PC (an IBM PC jr) and 3. Freedom from ever having to spend a holiday with family again.

We had great holidays when I was a kid. I mean really epic ones. Especially Thanksgiving and Christmas. They were postcard perfect in most ways. But, as I got older, they got tedious. My parents were very kind to my husband but it was clear to me that they liked him as much as I did - not much. And holidays, particularly, got not fun. So I swore off. And, for the next 15 years, I spent all holidays by myself or with friends.

Daddy died in 1999 and I fell into a habit of flying to Charleston, SC and spending Thanksgiving with my mom. We had some really fun Thanksgivings. Traveling there and back was a PIA but it was worth it. She died in 2005.

Especially when I retired in 2012, holidays turned into annoyances. Stores and businesses I wanted were closed, people left town, things didn't hum along like they needed to for ME.

But, over the last year or so, I've changed my mind. Holidays now mean traffic on the bridge coming home from the pool gets very more reasonable. Even this morning, I was able to swim early and the traffic home wasn't bad at all. And I don't mind the closures so much either. TV shows go on hiatus but Amazon and Netflix fill in the void.

Today, I have a bit of an adventure. I'm off to the Seattle Art Museum to see the Yves St. Laurent exhibit. I fully expect to be turned away at door for some reason or another, in which case, the adventure will be a lovely walk.

I may pop into the Target across the street from the museum and check their craft supplies. I need a good, cheap colorful felt source. Who knows what else might happen?

Breaking out of my rut is pretty exhausting. Or maybe it's all the walking when mostly I just sit on my ass all day. But, I'm glad I went to the museum. Mainly it reminds me how every much I love Seattle. I love the sights and sounds and smells and people. I love casually turning my head and seeing, in between tall buildings, the ferris wheel with Puget Sound behind it.

I love that we have such a huge, snooty art museum staffed with people every 10 feet who stare at you staring at stuff, either ready to pounce or just judging your staring. I just think I'm not an art museum person. The operatic music was disconcerting, the lighting was really weird, too dark then too light and the heat. HOLYmotheroffuckinggod was that place hot. I would think that all of the artwork, the dresses included, would much prefer cooler temperatures for a long life but, apparently, they like boiling fucking hot.

The dresses of the exhibit were really too far away to be able to see any detail at all and they were too high up. His notebooks and sketches were interesting but the damn guy hand wrote all his notes in French! My French is rusty enough without having to wade through European hand writing. But, the pictures were pretty. They did have some of the paper dolls he made when he was 11 and all their outfits. I loved those. I was a huge fan of paper dolls when I was a little girl.

The one outfit I could get close enough to study had a very poorly sewn zipper that just cracked me up. 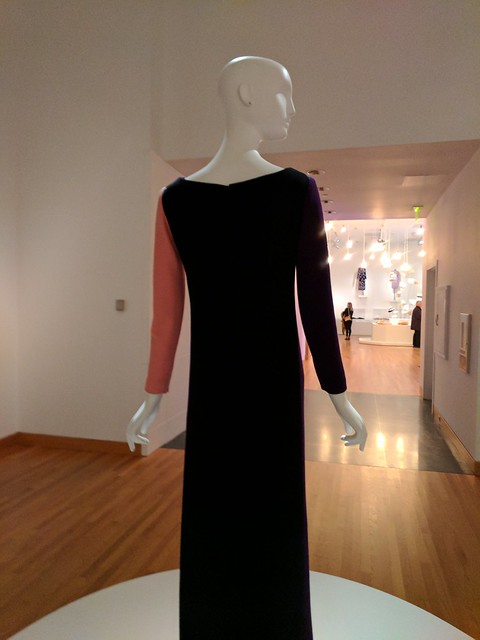 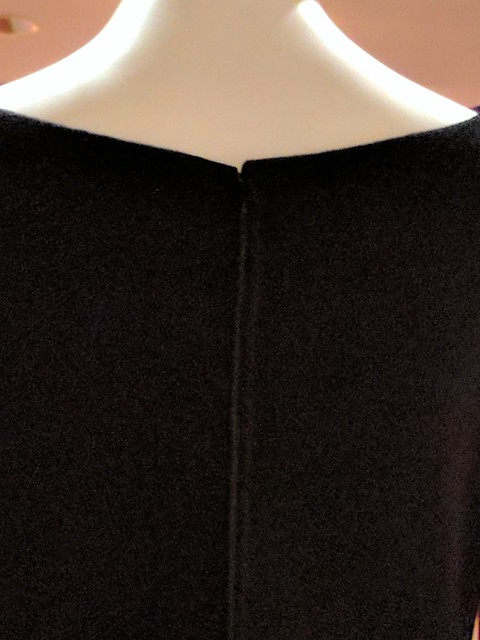 That neckline is supposed to be one solid line. That jog would give Zac Posen and Heidi klum a fit and give the designer the old Auf Wiedersehen - shoddy work.

And Target didn't even have any felt.

Walking home was a bit of a pull. My feet are used to not being walked on that much. I did stop by the teriyaki place to pick up dinner. I really need to get out and walk the 'hood more often. Stores and restaurants have closed and re-opened as something else without even telling me.

I have more walking to do on Wednesday - about the same distance but in the opposite direction. I have tomorrow to rest up.

I came home and made a doll.

My new neighbors found their window shades, apparently, and pulled them all the way down. How the fuck am I supposed to get all judgy on their lifestyle if I can see in???? 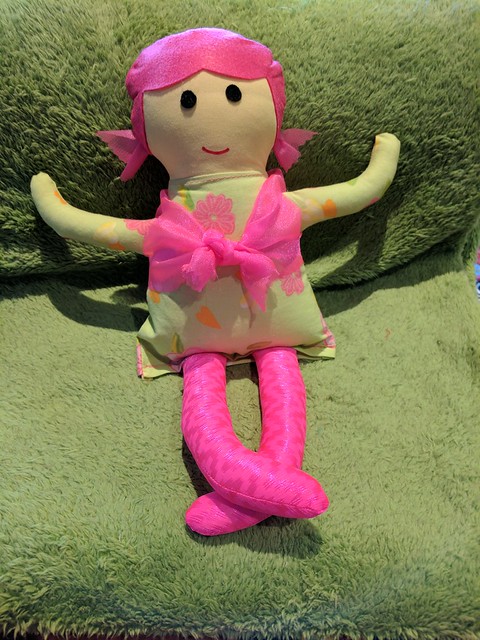