This morning while swimming I was making a mental list of all the sewing I want to get done. There isn't enough time.

Just now I was on the Seattle Reddit sub and someone asked about craft classes and I was reading the responses and clicking on the links and thinking ... hmmm that class might be interesting and that might be fun and ... When all of a sudden I came to my senses. When the hell do I think I'm going to have time to do anything????? There isn't enough time as it is. I closed all the tabs. Whew.

When this entry is done and my coffee is gone, it will be time to go deliver bears and dolls and then home to make more.

I got an email from Google last night that if I decide to keep my new phone, they will send me a coupon for free! for one of their new VR headsets. That's kind of cool.

There is a big party being set up right now in the parking lot outside my terrace. Just looked it up: Friday Night Vibes: A Pop-up Happy Hour Experience - Oktoberfest. Dress in your lederhosen best and celebrate with Elysian Night Owl Pumpkin Ale. That should be fun to watch. It is really windy out there right now. I hope the weather doesn't blow away their fun but that it stays cool enough so I can close the door to the din.

I found my cat's cryptonite. She likes treats but if I put one out on the counter, she won't rush to it. She'll saunter. Sometimes when she's very hungry, she'll attack her canned food. But, sometimes, she'll just eat it later.

But Sheba has new meat sticks that she will do ANYTHING for. ANYTHING. Plus, they come with handy break off points so one stick is really 4 or 5 treats. Just the right amount for her. She goes nuts. Now I can train her to do something. I need to figure out what. I'm thinking a trick. High 5? Roll over? I don't want to waste it. So I need to get the right one. Also I need to lay in a supply of sticks first. Amazon is out. I may need a trip to Walmart which is where I found them.

I've been dropping off bears, then bears and dolls, with Jeannie since

mtgirl first suggested her organization in March of 2007 when my previous place - a Salvation Army emergency center couldn't take them any more.

Jeannie always greets me with a big smile and a big thank you and I say 'see you next month' and she says 'be safe' and that's it. In the early years I used to, every other month or so, ask to make sure she still wanted more and she always assured me she could use as many as I could bring.

But, she rarely gives me any specific feedback. I kind of get the feeling she wants to make sure she doesn't annoy her 'golden goose' of a toy bringer.

Today, however, she broke the mold. Turns out the dolls with the glasses are wildly popular (go figure!) and the ones with the hajibs are a huge hit. She the home visiting baby nurses are often barred from the homes unless they come bearing gifts for the kids. And according to the nurses, it's the fathers who have issues with the dolls. Especially Muslim fathers. The hajib makes them ok for some fathers. But, as Jeannie understands it, children aren't allowed to play with things that have faces. Only God makes faces. UNLESS they are green, blue, purple... God doesn't make those kind of faces so my dolls with non-flesh colored faces meet the Dad requirements and if they are wearing a hijab they are a big hit.

Mostly it's the comments from people reading this journal that created the dolls with different colored faces, wearing glasses and sporting the hijab. I think that's probably the coolest thing of all!!

Oh and she said that the high contrast fabrics were also the most popular. I had one lime green with giant purple polka dots that was apparently fought over. Sadly I don't have any more of that fabric (also one of my favorites) but now I know what to look for.

On the way home, I was at a red light next to Cash & Carry which is the semi-wholesale grocery. It's where small diners and cafes buy a lot of their food. I had been meaning to pop in there and see if they had frozen cut okra. So I pulled in. They did have frozen cut okra but, even better, they had frozen cut breaded okra. Really nice. And the good tortilla chips. I got one bag of each.

Teryiaki is still on the maybe today. But first I think I'll go dig through my doll stuff for some high contrast options. 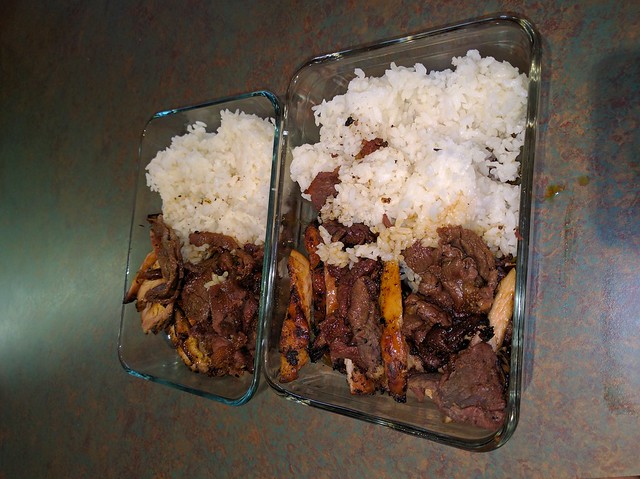 I finally took the teriyaki walk. This is what $11 gets you. Plenty enough for two dinners for me. Yum.

I got my next shirt cut out and a couple of dolls ready to sew and one doll sewn and one bear finished. I hate having empty chairs which is what I get on delivery day so now neither the bear chair nor the doll chair are totally empty.

Somehow on my walk or in my sewing, I tweaked my back just a little. Enough to make me stop. So I closed the sewing room for the rest of today. The joy of no deadline.

I appreciate having no dog in the baseball playoffs. I am feeling frustrated for my Boston friends. 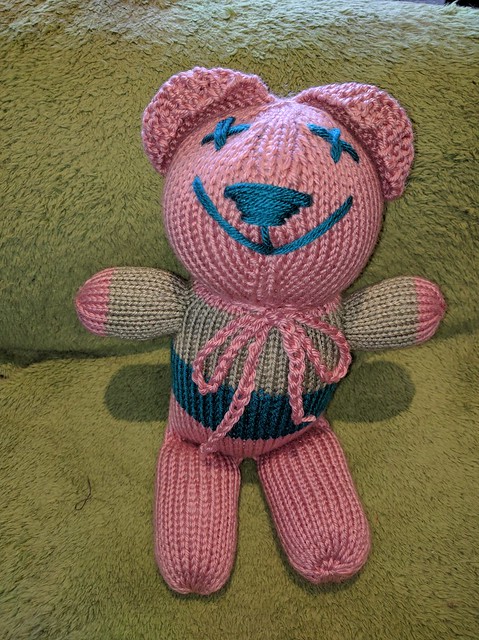 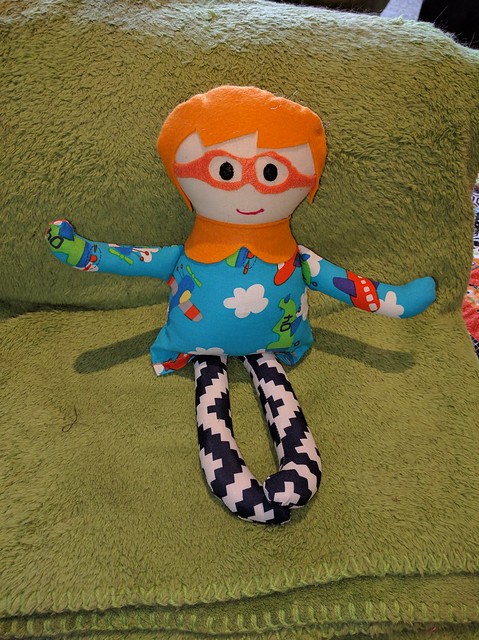