My brother got here just fine. While I was waiting for him, I was watching a guy with two little boys in matching jackets - probably 5 and 6. The boys were totally antsy but not out of control. The guy was good natured. They were fun to watch.  As arrivees starting coming down the escalator, the guy was watching intently and the boys were just dancing around. My brother arrived and we hugged and hi'd and I pointed out the little family waiting and we watched. I had guessed they were waiting for their monther.  I was wrong.

Pretty soon, their grandparents (young - like my age) arrived and or what an arrival. It was hard to guess who was more delighted, the guy, the kids or the grandparents. They all got their money's worth. It was delightful to watch.

We got home and had a drink and a nice visit and then went out to dinner. We went down the street to a restaurant that's been open for a year but I hadn't been yet. It's one of those precious Seattle chef restaurants (Matt Dillon, in this case) that is very very impressed with itself. In some cases this makes for an uncomfortable, expensive and tasteless dining experience. But, not really in this case. It was snooty but our dinners were different and delicious and the service was nose up but good. And we walked the long way home. It was fun.

I think my brother was a little disappointed to learn that I hand canceled swimming for the week.  I think he had his eye on that time for himself. But, he'll get over it plus we're pretty good about space. Right now I'm on my bed with coffee and the laptop and he's in the living room with the lights off with his coffee and his laptop. It's quiet and nice.

Our first requirement today is bear delivery at 9:30. (It's nearly 8 now.) We're also be home tonight to watch the football game (cause he really wants to and I'm fine with it). I do need to figure out what we do about dinner. The game starts at 5:30. Waiting until after the game is not workable. Maybe we'll do Amazon Prime Now delivery.  Actually, probably we'll do that.

I think maybe now I'll get into the shower. I never shower at home any more. Better I get in and make sure it still works without issues. 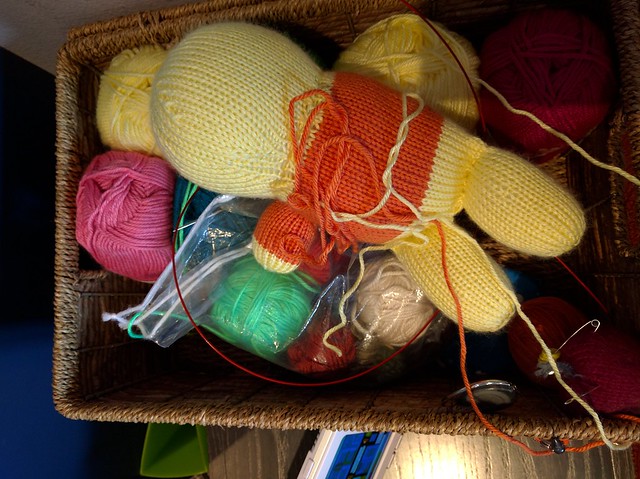 I woke up several times early this morning but about 7ish I heard my brother so I got up. Turns out he had already walked to the center of town and was back. He had fun. We got showers and headed out for bear/doll delivery.

The bear lady was delighted to get the dolls - whew!

Then we went over to Endolyne Joe's in West Seattle for a late breakfast and wow was it ever delicious. That place pisse dme off a couple of years ago but I'm sure glad I gave them another chance. We had a terrific waitress and it was all great.

Then we made a couple more stops on the way home. We walked over to the new train station because it is so pretty and he hadn't seen it. Then we came home so he could touch base with the shop and check on his guys. About 4ish we went over to the International District to Samuri Noodle for a light and early dinner and make sure we got home in time for the football game.

And now we're home watching the game. We may have to watch another football game this weekend so I'm practicing. We're having a really nice visit.
Collapse