My swim was good and my latest suit worked perfectly. The pool population today was clearly folks who were swimmers but not at this gym. They all walked in with an air of confusion. The spa was packed. It got crowded towards the end of my swim so I was very glad I had gotten there just before the doors opened. And, that's it for swimming until after Christmas. Missing a day won't kill me. It's annoying but not fatal.

I got home about 9:30. It's nearly 11. I have been piddling around doing nothing much of anything for an hour and a half. Android Pay dropped a $20 gift card into my account (special deal they have going) and I figured out I could use it without going to the store (score) so I fucked around on their website looking for stuff to buy. Didn't find anything I wanted. I'm thinking maybe after-Christmas sale?

This is the oddest of holidays. Stuff is open, kinda, until early evening and we get mail and packages delivered. But, there is no traffic - cars or people - to speak of. It's kid of deafeningly quiet. Plus, not having any plans, myself, it's kind of hard to get a handle on what's happening. Weird. Not necessarily bad weird, just weird.

I was lucky enough to have four living grandparents until I was in college (and a couple of them, even longer). My paternal grandmother was as mean as a snake but without that much personality (she didn't care for me either). Her husband was one hilarious sweetheart always ready to give or receive a belly laugh. My maternal grandfather was the nicest man (and the one who taught me to love baseball) but not a very successful human and plagued with headaches and glaucoma when I was little and severe dementia by the time I was a teenager.

But, Grandma, my maternal grandmother, was the world's most perfect Grandma. She had gigantic squishy arms and her hugs (which were given freely to anyone and everyone) could cure the world's ills. Her cereal bowls had cartoon characters in the bottom. You did have to eat all the cereal to see them but it was totally worth it. She had candy in a bowl in the living room all. the. time! She let us have tea parties with her antique tea cups and she always reminded us to invite our imaginary friend*. When Oklahoma City first got air conditioned buses, she once took the three of us down to the bus stop where we got on the bus and rode the entire circuit until we got back to where we had gotten on. And we got to sit anywhere we wanted. To this day, it remains one of my most treasured adventures ever.

Today she is on my mind because of the doll clothes she made our dolls. They were amazing and intricate and beautiful and such fun. I specifically remember she made for my doll and my sister's doll, white terry cloth bathrobes with our dolls' monogram on them!!!

I have spent all morning making one freaking doll outfit and in between the FUCKs, SHITs, OH CRAPs my thoughts have been "Oh, Grandma, I am so sorry. I had no idea how much went into those precious clothes. I loved them but not enough. I cannot believe you went to all that trouble to make them and today... 60 some odd years later... I get it. Better late than never?"

*My sister and I shared an imaginary friend. Her name was Miss Sippy Cookie. I think it's kind of pathetic that we didn't have enough imagination to get a friend each but there you have it. We didn't share anything else and haven't even spoken (my choice) in more than a decade. Cautionary tale?

I've made the underwear and the jumper. Next up the blouse and then the shoes. I'm taking a break and this break might last until tomorrow. 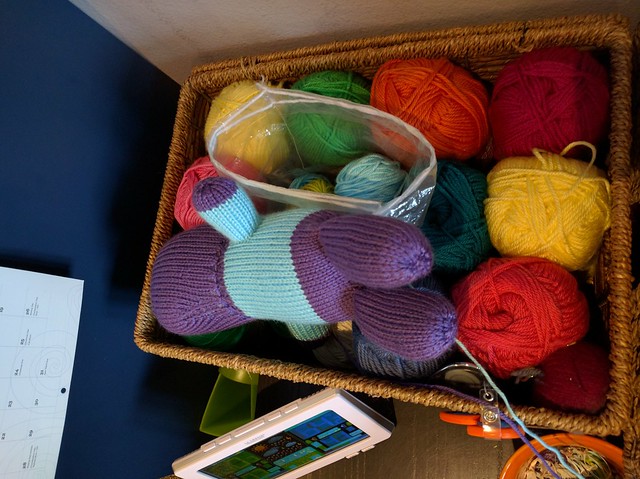