I have been mainlining that stuff. I have about a 4th of a can left and then I'll be free of that evil deliciousness.

I got to the pool as early as I wanted this morning. Zero traffic. Google, who always tells me how much longer than usual it will take me to get home due to traffic, this morning told me it would take me 6 minutes shorter than usual.

I'm looking forward to this luxury until January 4th. Sadly, one of those days, the pool isn't open and 6 other of those 12 days, the gym doesn't open until 8 anyway so not really any different. But I plan to enjoy the heck out of the remaining 3 zero traffic, swim any time I want days.

I have nothing I have to do or anywhere I have to go today. I have lots of fun sewing to do. Plenty of good food in the house.

First I need to clean up the kitchen. I have a new swim suit to cut out and the best place to do that is on the kitchen peninsula but not when it's full of junk. 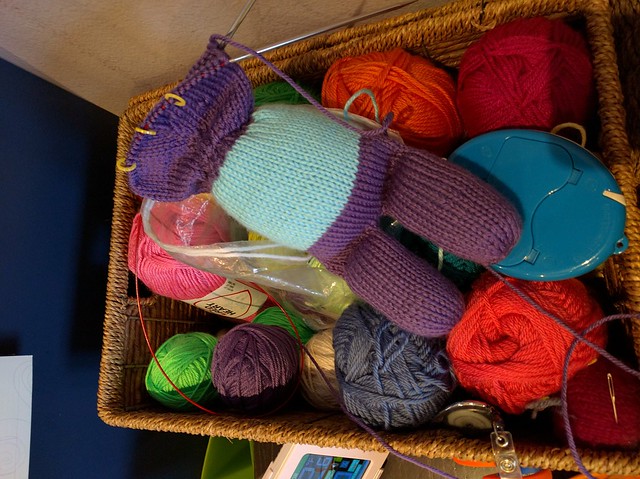 I had a bit of a squabble with my sewing machine today but I think we've patched things up. I made a new swimsuit and then did a bunch of clean up of the whole area.

Then I made (traced actually) the pattern pieces for all the dolls clothes. Tomorrow's project.

When my online yarn shop ran their Christmas specials, I ordered a bunch of bear yarn and the last of it arrived today. I'm set for a while with a good range of colors. (Well, as good as I can get with the limited available. I stick to the softest yarn available for cheap which is basically three brands and two of them have very limited selection. The third band has good selection but is also the most expensive.)

Dinner was a fail but it was my fault and at least I used up some freezer stuff.

I looked ahead on TiVo for the next week and a half and zzzzzzzzzzzzzzzz I guess it's time for some self entertainment. I do have a couple of good books waiting and some recorded stuff as well as Nexflix and Amazon but I think it's safe to say that the next 10 days will be q u i e t.

Oh, one bit of condo gossip. Hunter and the one or two other guys who live in the unit next door have 3 dogs. They had 5 for a while. Pugs. The problem is that the homeowners association has a very strict 2 animal policy. A couple with 3 dogs rented a unit upstairs last year or the year before. They got all moved in and someone turned them in for dog violation. They even appealed to the board with a vet to testify that one of the dogs had mere weeks to live. But, no, they got the boot. Hunter and whoever lives in that unit with him are not being careful about who knows they have 3 dogs. I think his goose is cooked.
Collapse