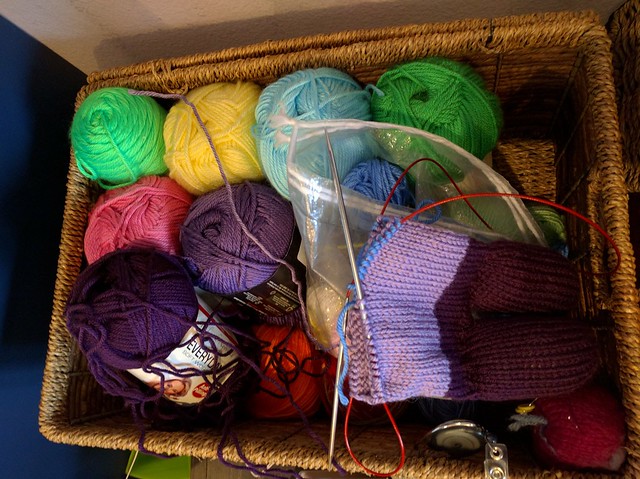 Today's swim was kind of cool. The past few Sundays have been crowded but not today. It was just me and my buddy, Brody. We had the pool to ourselves. The locker room was also pretty deserted. Someone suggested it was the Seahawks game but I think it was the combo of Seahawks and holiday. Whatever. It was nice. Very nice.

And no sun so no glare. Excellent. I high tailed it home and got after they had the barriers up and the cops on duty but before traffic got bad. (They block off the street that my garage entrance is on but I have a sticker that says Let This Special Snowflake In.)

I could have sworn I had a heating pad but I'll be damned if I can find it. I have too much shit.

While I was swimming, I reorganized my sewing area. In my mind. So I think that's what I'll do today - organize it for real. I have a couple of projects cut out and ready to sew but I think I am going to save them for the new machine which was supposed to get here Tuesday but now looks like Wednesday.

All that online shopping these past few days is going to really make package delivery a bit of a crap shoot this week, I suspect.

I bought some Curel Itch Defense stuff - soap, squirt lotion and spray lotion. The spray lotion turns out to be a great idea with very bad execution. The sprayer is nearly impossible to operate. It takes two hands or more. So while it is possible to eek out a bit of sprayed lotion it's not possible to do it while aimed at your body.

So I wrote them a little note explaining the issue. I got a response today from a human asking for more details. I was surprised and impressed. I was also really amused by the message in the note's auto-sig inviting me to take their survey 'requires Internet Explorer' and then when you click on the link again, at the top of the page it tells me that it is ONLY compatible with Internet Explorer. My Chrome browser handled it perfectly.

I had the best omelette this morning. Used up the last of the swiss cheese and the last of the capers and the final slice of rye bead that's been in the freezer since forever. My brother often makes soup out of stuff like that. He calls it Must Go Soup... everything in the fridge Must Go. I had a Must Go Omelette. Excellent.

I started smoking when I was 14. I didn't have my parents' blessing but they did nothing to stop me either. They both smoked unfiltered Camels and had for years. We lived in Winston-Salem as in RJ Reynolds Tobacco. Smoking was showing support for the local economy and in the 50's that was nothing to sneeze at. You were respected and praised if you did and derided if you didn't.

Most of my friends smoked. If they didn't, they pretended they did. (Adults did this, too. My parents were good friends with a couple who always held an unlit cigarette in their fingers at cocktail parties "As a sign of respect for the tobacco industry" my Mom explained to me when I asked.)

I do not remember ever being restricted on smoking areas until the early 80's. Oh wait, not true. When my grandmother was in the hospital in Oklahoma City, she was hooked up to an oxygen tank and we were not allowed to smoke in her room. We had to go out to the hallway to smoke. I remember her apologizing for it and offering to turn off the oxygen if we'd rather.

In the early 80's, I worked at an IBM manufacturing plant in Charlotte, NC. There were no smoking areas. Not many. But I specifically remember the conference room rules. 50% of the conference room had to be dedicated to non smoking - there were signs for the table. One said No Smoking and the other said Smoking is Permitted. (I still have one of those but I can't find it now. It's there somewhere.) We had 4 person conference rooms. Half the room - I'm serious - was non smoking.

When I moved to Minnesota, we were still allowed to smoke inside. Whew. That can be some discouraging outside smoking there in the winter. When I moved to California in 1989 was the first time I ever saw an outdoor space designated non smoking. There were two picnic areas off the cafeteria at our IBM Lab and one of them was non-smoking. It seemed ridiculous to me at the time.

The uproar of not being able to smoke except in the back of the plane.

I enjoyed smoking. I liked the smoking tools - lighters and ashtrays of all kinds of designs. I liked the feeling and the smell. And, later on, when smokers were banished to enclaves, I loved meeting new people in the smokers corner. My father always insisted in sitting in the smoking section of a plane even after he quit. "There is a better class of people back here."

Cigarettes got really expensive in Seattle. The cigarettes themselves weren't bad but the city, state and federal taxes drove the price up. When I was 14, cigarettes were $2 a pack. Today, in Seattle, I think they are in the neighborhood of $10 a pack. You could no longer smoke inside anywhere and so having a cig necessitated you leave what you are doing and go outside. The whole thing was just becoming an expensive hassle and I had this annoying dry cough so one day I quit.

It was a Sunday. I was in my early 50's. I'd never tried to quit before. I didn't stop cold turkey. I didn't smoke at all for a week and then I'd light up a cigarette and take a couple of drags and then put it out and pick it up again the next day. One cigarette lasted me four or five days. I did that for about a month and then lost interest.

I missed the people. And the feeling but most of all I missed the rhythm. Still to this day, I'll be working on something - like organizing the sewing room - and after a while I'll be ready for a smoke break. But I don't smoke so... it's confusing.

My housecleaner smokes. When she gives me a hug she smells like stale cigarettes. It's not that nice a smell. But, I get it. She loves this red ash tray I have in my living room. So for Christmas, in addition to the normal extra $ I give her, I'm wrapping up that ash tray. That will leave me with on only 2 left. 1 is one I made in a pottery class years ago and is nice for keeping pins in. The other one is an outdoor one that I keep on the terrace.

I need to find that smoking is permitted sign and put it out by the ashtray.
Collapse