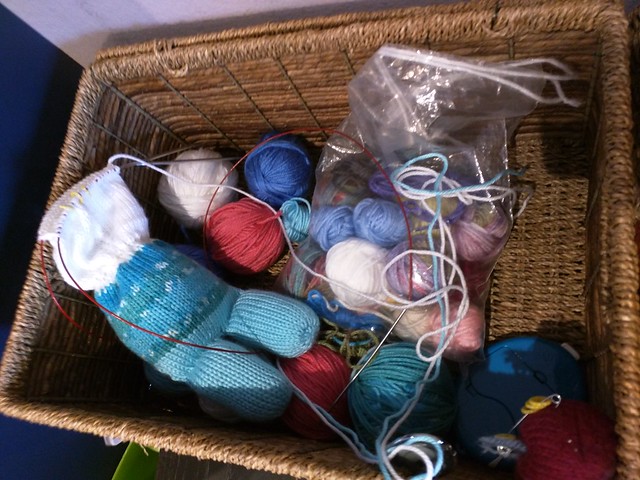 Monday, Tuesday and Wednesday of this week, I got to the edge of the pool between 7:45 and 8:15 and there was no one in it. Most of the hour I swam there was no one but me in the pool.  And that was the same story when I got out an hour or so later.

Today, I got to the pool at 7:45 and there were 5 people doing laps! A couple left and then a couple more came in. Until about 10 minutes before I got out when there was only me and one other person. It was wild. As I was getting dressed, I ran into a regular. She was there for the Aqua Fit class at 9. She said that the instructor has been a no show for the past two weeks.  No sign of her this week either before I left.

I was too early to make it back over the bridge this morning so I stopped at the grocery store to investigate this oatmeal cup thing. They had tons of different kinds and none - zero - zip cups of plain old - no flavor, no sugar oatmeal. Oh well. I guess I'll just dirty up my own bowl.

I was going to stop by the by-the-pound Goodwill and score some more pocket material and get some swimsuit practice fabric but I turned wrong and decided to go another day.

The tracking number for my new phone says it is coming today instead of tomorrow! It doesn't say 'Out for Delivery' so I'm a bit skeptical but I'm ready. I have my current phone all ready to sell.  Photos taken, sales copy written.  I have a protecting case for the new one.  And an early delivery would be delighted for sure.

I really have no plans today.  I'm ready for whatever!

I was born in 1949 - just setting the stage here. Women wore dresses and skirts. Pants were slacks and not worn that often and only in the most casual of settings. Jeans were for farms workers.

We lived a half mile from the elementary school and walked every day - in Winston-Salem, NC. It sometimes got pretty cold in the winter. We wore mostly cotton dresses with cotton socks. And bare legs - always. There was such a thing as tights but they were only for ballet class.

On the coldest days, my Mom made me wear what we called leggings. They were just elastic waisted pull on corduroy pants. You pulled them on up under your skirt and pulled them off when you got inside. I thought they looked terrible. I usually walked to my friend Linda's house and then she and I walked to school together. There was a cool little nook under her front steps. so, we'd leave out her back door, walk around to the front, shed our leggings, stash them under the steps and go to school. On the way home we'd reverse the process. Legs were cold but we looked sharp.

When we started 7th grade, for very special occasions and church on Sunday we wore stockings. 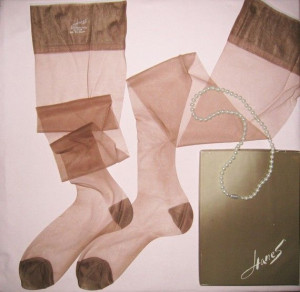 During middle school years those stockings were held up by a garder belt. (And, yes, they were really uncomfortable. The little buckles that attached the stockings were made of metal so don't sit on anything hot or cold, either.) 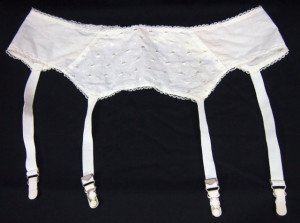 At high school, we graduated to girdles - regular or panty girdle. 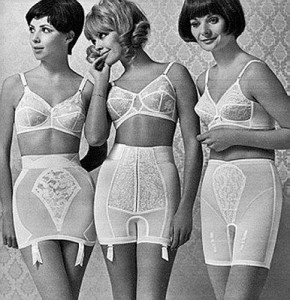 Not all the stocking holder buckles were plastic yet, either.

Then panty hose were born. I remember my Mom ranting and raving about how ridiculous panty hose were and how they were going to die because no one in their right mind would spend that kind of money some something so stupid.**

When I went to college, the world was just about to burst open but hadn't yet. Rules for girls were no pants except on weekends. (Also no beer on campus and no men in dorms.) Four years later, they were just happy our asses were covered and did not care with what. Beer was sold on campus and they gave up tracking where men (or women) were.

After college, I wore pantyhose every day to work. I don't think I started wearing pants to work until the late 90's and even then not often and always with pantyhose under them. It was the mid 90's I spent a couple of years working for myself from home and never again wore heels and panty hose to work.

** It actually wasn't too long after this that Daddy's company (Hanes Underwear) merged with Hanes Hosiery and pantyhose became the family's bread and butter. Our family dinner conversations quickly turned to crotches.

The first panty hose were all nylon. Crotches around the country begin to scream with Vaginitis. Daddy was spending his days trying to figure out how to marry the cotton panties that his side of the company made with the hose that the other side made and the reason was crotch rotting.

I finally quit bringing friends home for dinner. All this talk about vaginas and crotches was just too embarrassing.

But once they got the crotch problem nailed, pantyhose turned into a real cash cow for a long time until BAM, one day it was over the gravy train stopped. Jeans were in and China took up the slack and Daddy retired.

And now I wear leggings... again... and don't stow them under Linda's front steps any more.

Soooo the new neighbors moved in... and I have been careful to keep my TV sound down. I think if I keep the volume at what my TV says is 30, I'm good.

But, tonight, I got pounding base from their wall. I heard it loud and clear over my own TV sound! So I went and knocked on the door but clearly they couldn't hear me over the noise. So I wrote a nice note asking them to cool the bass or maybe move it from the wall?

This is EXACTLY the same thing I went through with Rude Guy who was the last renter.

30 minutes later, I got a knock on my door. A perfectly lovely (actually pretty hot) older guy was there with my note and a truck load of apologies. He has a fabulous handshake and his name is Hunter. I'm also pretty sure he's gay.

He just could not have been nicer and asked if maybe tomorrow or soonish we could get together and do a sound level check with our units. I allowed as how I'd love to.

I love him. Yeah for a fun, new neighbor.

My new phone didn't make it. About 5 pm the tracking number went from delivery today to pending "No scheduled delivery date available at this time." I'm not going to get my panties in a twist. It will get here when it gets here.

I had an omelette for dinner. It was not one of my best. Oh well.
Collapse