Today's swim was all about couches. I don't know what I want but I do want not ordinary. I realy want what I have but a version that is comfortable and/or folds out to a bed. The LoveSac (besides having just a horrible name) is just too ordinary and expensive. I will still go to see it.

I found a few loveseats that looks like they might fill the bill on Wayfair but they are $1,500-$2,000. I'm not gutsy enough to paying out that much $$ sight unseen. But then I thought well, fuck, if I'm going for ordinary, maybe my best best is just to do IKEA. 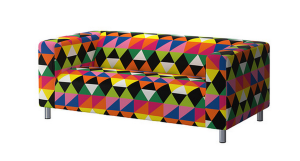 At least if I got this one, there's a fun color option.

The rest of my swim was a battle of the spa. They have had problems with the spa leaking into the pool. So you swim along nicely in the cool water and then hit a patch of hot and then back to the cold and then another hot patch. It was not as bad today as it was a couple of weeks ago but still it's distracting. It feels like you are swimming through hit pee. I hope they get it fixed and soon.

I came home after my swim and made myself a nice breakfast and then washed all those dishes and now I'm watching the Mariners play the Red Sox and not losing yet! After the last two games where they lost 15-1 and then 22-10, who the fuck knows. Probably today they will do ok today.

There's a soccer game at the stadium today at 2 so I'm not going anywhere at least until after 2. I probably won't go anywhere any way. Maybe up to the fabric store but maybe not.

The Mariners tried to give the game to the Redsox but they wouldn't take it. So finally, in the 12th, they just went ahead and won. This has been 3 days of the worst of Mariner baseball and, in the world of Mariner baseball, that's really saying something. Geesh.

I decided to give up on the sofa for a while. I hope. I'm not good on abandoning stuff like this - I'm kind of a dog with a bone. But, really, I don't need it. Yes, it would be nice to have an alternative comfortable sitting spot but not worth the hassle.

I killed some time this afternoon on my brother's website. While the game played on.

I cooked those potatoes I got the other day (from the Canadian potato people) last night and they were delicous. So I fried up some of the leftovers for breakfast this morning and they were delicious. Just now I cut up the rest and made potato salad. OMG. I am on a potato roll here.

It's too hot to walk so I think I'll watch some TV and knit. When my back gets tired of that - probably in an hour - I'll go take a garage walk.

machupicchu wrote not long ago about his ex-roommate asking him recently how he would rate his life currently - on a scale of 1-10. He said in that entry that he didn't know anyone who would rate their life a 10. My immedate thought was - well, I sure would. And then I decided to chew on it a while and make sure. So I have. I've chewed on it for several days now. And, I still think my life is a 10.

There are magic wand things I might change. I'd like to be thinner without having to change any eating habits. I'd like better lungs but I do ok with my poor suffering ones. Really if I didn't have my life already, it would be the one I wanted to have. So... yeah... 10 and so grateful for it.
Collapse