I slept wonderfully last night. Zoey slept in her bed in the fish room and met me in the kitchen this morning and begged for breakfast. Just like always.

Mother's Day is a nothing burger to me these days, like Father's Day. My parents have now been dead for more than a decade. I, myself, am neither a mother or a father. I am a little annoyed that my Sunday brunch is crowded out by interlopers but whatever. When strangers call out Happy Mother's Day to me, I just say thank you. I don't really care about any of it one way or the other.

My strongest Mother's Day memory is one of church.Regardless of our lack of interest, my parents marched us there every single Sunday. For much of my growing up we attended the First Christian Church in Winston-Salem. It was kind of Presbyterian-ish and not a lot of pomp or formality but, on Mother's Day they handed out carnations to everyone. You got a red one if you mother was alive and a white one if your mother was dead. So I would spend the entire service conjuring on who had dead mothers and who didn't. It was weird then and it has not lost one bit of that weird as I think about it now.

So no brunch today but I need to walk. No brunch to walk to and from. I'm thinking it might be a good day to Costco walk. I think I'll plan on getting there when they open at 10 and do the park at the end of the lot thing and then walk the aisles. I don't want or need anything so I can just walk around at some speed in comfort. But, I do need to get there and get back before the baseball traffic chokes my route.

The Mariners have won two games in a row (BFD with this team) and the world's best pitcher is pitching today so I'm guessing that there will be a lot of Mother's Day baseball attending today. But, if I get out of there before 11 and take the non-direct route, I'll be ok.

But, first, I think I'll make my own brunch here. I got some English muffins at the grocery store yesterday so today's breakfast will be FANCY!!

I seem to be in 'get it done' mode. I went to Costco. Turns out MANY MANY people decided Mother's Day was an excellent time to go to Costco. Holy Crap. But, I was in Costco zen mode so no biggie. But it did make it a little difficult to stroll through the aisles at a clip so I gave up, got some stuff and left. (I did park at the way back of the second lot so at least there was that.)

I got sponges for doing dishes. Being Costco, of course, there are a bunch o' them. So I cleaned out the under the sink area to make room. I tossed out a bunch of stuff. I had some really gross old sponges and stuff under there that had probably been under there for 25 years. Yuck.

Then I cleaned the pillows from Zoey's computer bed. I have enough spare hair now for an additional cat. Wonder if there's a kitty version of Locks of Love?

While at Costco, I saw that they had a few air conditioners out. Just like the one I bought last year. I think I paid $450 and they were selling for $400 today. A GREAT deal either way. I decided to go ahead and set it up today. I hope we are still weeks away from needing it but I'll be ready.  In the winter, it lives in a storage closet on the terrace.

I can't remember what year I got my first air conditioner on wheels. I know it was at least 2000 or before. It was a giant gangly thing that sounded like a jet landing. I'm now on A/C 3.0. I bought it last year and it's wonderful. Much smaller and much nicer looking and quieter and way more efficient. Way. Plus, it came with two nice storage bags - one for the unit and one for the bits.

So setting it up was easiest it has ever been. Nice. I have a pet door that I use for venting so when it's hot I can close the hot air out. My condo faces east. So when it gets really hot, if I make sure the blinds are down for sunrise, and turn on the air conditioner early, I can keep it on medium fan keep the whole condo - even the bedroom - not horrible. Almost as valuable to me is just knowing that I have it and can get cool no matter how hot it gets. Peace of mind.

Since I started my LiveJournal in 2002, I have recorded the days I set up the air conditioner and put it away. Makes an interesting study in global warming! 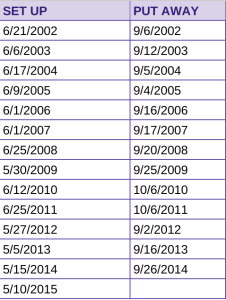 So today, after dragging out the air conditioner because of heat, is the day I remembered that I forgot to clean the oven! I was going to do it as soon as I let Chef Anita go. It's self cleaning but that means it just heats up to biscillion degrees. This oven is very well insulated. But even so, heating the oven to biscillion degrees in the Summer is just stupid.  And waiting til fall is stupid, too.

I just checked the 10 day forecast the coldest day looks like Wednesday when the high is supposed to stop at 58. I think I'll take my chances and do it then.  Assuming I remember. I put it on the calendar with a reminder and I'm writing this for reinforcement.

Also today I figured out a better way to hide the ugly brass on my fireplace. In fact to really hide the whole thing for Summer. It's a cover I'm going to make and attach with magnets. I even already have the magnets. I just need the fabric.  That may well be tomorrow's project.

One more tweak to the living room furniture and now it's just perfect for Summer. Comfortable, workable and it looks nice, too!

This has been a very productive day. Especially for a Sunday.
Collapse