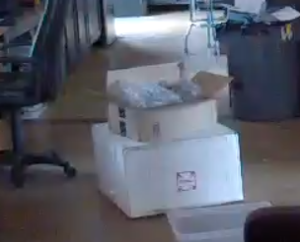 This is my new PC.  I watched my brother pack it up (via his webcam) this morning.  It's going to the shipper today. Can't wait.  I got the tracking numbers just now but they won't give me a delivery date until Monday probably.  I'm guessing by the amount that I'll see the machine by Thursday or Friday, hopefully.

I had Pandora on in the car and heard a tune that grew on me and by the end, I was in 'ohhhh I want to buy that' mode and the song was gone before I could even capture the name of it or the artist.  And I couldn't thumbs up it because the phone was off and I was on the viaduct.  I wonder if I'll ever hear it again...

Some skivvy webcam stalker is calling me.  This is a new (to me) guy.  I can tell he's watching the Dropcam because last night in one of his voicemails he referenced House of Cards which I was watching at the time.  He just called again and finally I figured out to turn on call screening on for calls for UNKNOWN.  I don't mind if he (or anyone else) watches but don't call me.  That's just rude.  I know what I'm wearing and what I'm watching and I honestly don't need you to tell me.

Swimming was very good this morning.  It was a bit crowded by then everyone finished up and I had a lane to myself so I did some extra.  I also found out in the apres swim locker room chatter, that Alvin (who used to be at my old pool) runs the masters swim on Sunday mornings at his pool.  They have lap swim after.  I've always been curious about how a real masters works so I think tomorrow I'm going to go up there and watch a little and then get a Sunday swim in!

I finished 'reading' Ken Jennings Because I Said So while I was swimming. It turned out to be surprisingly delightful.  He does the reading himself and is an excellent reader.  Plus, I learned all kinds of fascinating things.  I liked him from his first Jeopardy appearance and he just gets better and better.  He recently got chummy with Dan Savage and the two of them trading barbs on Twitter is amusing daily.  He has another audio book but while he wrote it, he didn't read it.  Hope whatever he writes next, he also reads.  It's a treat.

I had breakfast at a place that

ljtourist told me about - Burgundian's.  It has a weird menu but it was a nice place and my breakfast was weird but really wonderful. Toasted cheese topped with fried eggs, then applesauce (with apple chunks) and bacon.  My tongue was pretty confused but happy.  I'll be going back there.

The rest of today is probably more House of Cards and knitting and listening to that Pandora station in hopes of hearing that song again!  but, first, I need to break down a tower of shipping boxes and take them to recycling.