Most of the time, I am home.  Most of my home time, I am in my living room on my orange chair.  Most days, I leave the house once to go the pool and maybe stop at the grocery or pop into the library to return or pick up.  But those things turn out to be exceptions. I'm a hermit inside this condo.

I don't have a job. I don't spend time with friends. I don't have that many friends to spend time with. I don't go out just to go out. I honestly think the outdoors is more of a requirement to get from one place to another, not somewhere to go because it's there.  I rarely even text. My COPD does limit my ability to do some things BUT I think it's really more of an excuse not to do those things I don't want to.

My brother talked to me while we were in Las Vegas that he was concerned about his being so one-dimensional.  He wants more.  He wants a hobby or a something that will take him away - mentally and otherwise - from his regular life and mix him up with more/different people.

I think I have even fewer dimensions than he does but my difference is that I am really fine with my nothing. I deeply appreciate the nest I've made here and the freedom I have to wallow in it 24/7 if I like.

When I listen to pundits prescribe the happy, fulfilled life, they seem to pretty much take what I value, make a bullet list and say Don't Do These Things.

And yet, for me, I can't see why not.  I'm happy. I'm optimistic. I am not beholden to anyone.  I have no husband or children. I have a sister who's not in my life by my choice and I have my brother but that's it for family. I appreciate having my brother in my life and while he may judge and/or scratch his head at my choices, he respects my choices.  He explains me to people by saying 'she's unique'.

In thinking about my life choices, I realize that I started creating this current life years and years ago.  I think it's something I've always wanted and I am very grateful to have it now.  It's certainly not for everyone.  Most people don't even 'get it' but it works just perfectly for me.

I am trying to be patient with Seattle Seahawks fans.  But, I am beginning to hope that they lose on Sunday and this whole thing is over.  My twitter feed is littered with 12th man crap.  The local news is similarly but even more painfully infected with pathetic need to lather up the crowd already crowded onto the bandwagon.  I'm done. I'm over it. 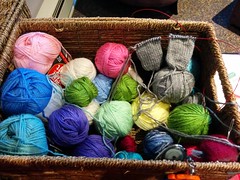 My brother is starting this new residential IT service. The concept is that his techs - mainly Jake - set up the residential computer with this fancy monitoring software and they make sure the machine is running in top form at all times, is updated, is virus and malware free, etc.

I volunteered to be a guinea pig.  Jake installed the software and has been fiddling around on my desktop machine now for a couple of days.  Today I noticed that the Windows starting up screen was on the monitor - the black one with the four windows colored flowerish thing in the middle.  It was there for a looong time.  Like about an hour.  I sent Jake a note and asked him if he wanted me to push a button or something and sent him a photo of the screen.

Turns out the whole thing was hosed.  Now, can you imagine, fucking up your boss's big sisters' computer so badly that it looks like the only recourse is for her to reinstall Windows?  I felt sooooo bad for him.  And I was also a bit annoyed at me for not making an image of the machine before he started messing with it.  But, at least there was nothing critical that stood to be wiped out.  A rebuild was totally doable. Just takes time to do those four million updates.

We tried rebooting and repairing, rebooting into safe mode, rebooting with CD and repair... nothing was working.  I was in the process of rebooting with CD for reinstall, when I noticed that the screen it was stuck on was trying to repair windows on my F: drive.  Windows was never ON my F: drive....  hmmmm.   Jake said to unplug the two non-boot hard drives. I thought that was a stupid idea and I was going to not do it and then I noticed it was dusty in there (yeah for see through CPU case) and I might as well take the cover off and blow it out and unplug those damn drives.

Of course, what he called his 'hail mary' trick worked.  Whew.  I  know he'll sleep better tonight and I'm glad for him.  Also kind of glad not to have to rebuild that sucker.

On the up side, he is way smarter now and oh so grateful that this happened to me and not one of his customers!!
Collapse