Today's swim was excellent. A couple of times a week, there's a guy who 'swims' in my lane who has a coach at one end. She works with him during regular lane swimming.  He pays attention to her and not to anyone else in the lane.  It's really a PIA.  Last week he nearly rammed into me and would have if I hadn't seen him and lurched out of his way.  That's what sent me to the teaching pool for laps on Friday.

Today they were back but this time they did their thing in the teaching pool!!  Yeah!  I had the lane to myself for a while and then shared it with a regular.  It was good.  The swim time is 6:30-8. I had been getting there about 6:45 but this morning I woke up before the alarm went off and ended up getting there right at 6:30. I like that better.  I reset the alarm.

This time next week all the pools will be closed for Labor Day.  Boo.

I found a weird dime sized spot of blood on the sheets this morning - in about the neck zone.  It was dried and not there yesterday.  I wonder what the hell that's all about.  Apparently, it wasn't fatal.  Guess I'll be changing/washing sheets today.

Also today, I'm going to go check out the new Mercedes 'home'.  And, as it happened, yesterday my dashboard told me it's time for my annual checkup!!  I'll make an appointment while I'm there.  Smart cars don't need anything but gas and an annual checkup.  No oil changes every three months.  Every other year they do a big check up.  Last year I think it cost me something like $150 and that will be next year's bill as well.  This year it's going to be closer to $700.  At least I've known that for a year so I have the money set aside and ready.  Also, of course, they wash the outside and clean the inside really well which I love and my car sure needs now.

I really need to get bear knittin'.  My production is down this month. I'm not sure why but I only have a week to make up the diff.

I grew up in the 50's a Southern town of about 200,000.  I learned early on that the people with money were two kinds of people - old money and new.  Old money people were classy and had style and may have been mean and tacky on the inside (likely not) but were always elegant and kind on the outside.  New money people were sometimes nice but generally had no taste or style to speak of.   We were not underprivileged in any way but we were not "moneyed" as my Mom used to say.  But we hung with those who were - both kinds. So I know the symptoms.

The Mercedes dealership of last week was decidedly old money.  Sure it was small and crowded and squeezed into a high density part of the city with no parking and not even great access but it was elegant and full of beautiful old wood and leather.  It had class and style to burn and the people did, too.

The new dealership left all of that behind.  It is big and bright with tons of parking and built by the Dealerships R Us designers.  It has zero style and less class.  So sad.  I was accosted by the New Car Sales Manager who introduced himself to me 3 times.  I assured him that I was not in any way interested in a new car but apparently he has hearing issues, poor guy.  The service guy was better but zero personality.  I made an appointment for next Wednesday but I'm pretty sure I'm going to move it out a couple of weeks.  They didn't even have their 'deli' section finished. I want free cookies!!  I forgot to test the wifi but surely they have it fast and free.

Bye, classy old place.  I'm sure glad I got to meet you. 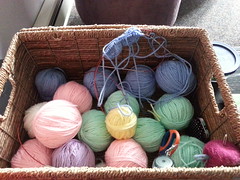 About 3 and a half hours ago, I took the clean mattress pad and sheet and made up the bed.  Zoey helped.  When I put the bedspread on, she did her lump trick at the end of the bed.  I just walked by and the lump has moved to the middle but is still in the bed!! My LOL did not even wak her up.  I guess bed making pretty much exhausts her.

I did think that the blood on the sheet might be hers since she spent a good part of the night sleeping with me and was positioned in that area but I can't find anything on her that looks broken either.

Maybe we got visited by a bleeding ghost who is a trickster.
Collapse