I'm up early for my 8:30 swim class.  I think, like last week, I'm going in early to stretch out first with some laps.

I have my sights on a breakfast place after and then a trip to Fred Meyer.  I have a short shopping list but no reason to put it off.

It is still so weird to wake up and not have anyone bugging the crap out of me for breakfast and more breakfast.  Zoey isn't that much of a morning person cat.  She's up but lazily and has no interest in any breakfast.  It's also still strange to be able to leave part of a sandwich on the kitchen counter.  Or not having to clean up immediately after dinner.  Zoey has no interest in people food.  Yesterday I was eating some grapes and she was pawing the bowl but, turns out, she didn't want the grapes, she wanted me to get all the grapes off the vine so she could play with it.

It has been more warm out than I like but at least I've been able to keep it cool enough in here to sleep.  Only six more weeks til we get past this.  If it gets no worse than it is now, we will have had an easy summer and I will be very grateful.  But, I'm ready for long sleeves and socks.

And I need to stop that.  Wishing for things that aren't possible and wasting days just to get to other days is not how I want to be.  Time for mind over matter.

Actually, time to suit up and hit the road.

Helen Thomas is 85 today. It was in August 32 years ago when she changed my life.

I was a very young newspaper reporter in a small town in central South Carolina. In those days - pre Woodward and Bernstein - a print journalist 'created' a career by moving from paper to paper and gathering experience and clips. I had started out in Wheeling, WVa. I got my big break when I was hired by the Pittsburgh Press. I started on Monday and they went on strike on Tuesday - for 3 years. But I didn't stick around even for three weeks.

My parents were living in Aiken, South Carolina. Actually, they were just getting ready to move to North Carolina. I went to visit and stopped in at the newspaper there and got hired. It was actually a good gig as newspapers go. I got to do a bit of everything. I was even the sports editor for a few months. I was on track and making tracks. Until Helen Thomas stopped me in my tracks.

It was a Sunday morning in August and I was reading the Sunday paper and drinking my coffee. I got to Parade and opened up the Q&A section in the front cover.

WTF??!!!!!! Even in the early 70's and even as a person of the lower class (female), I had hoped after basciallion years (which is what I figured Helen Thomas had logged in) of reporting I would be making more than $29,000 a year!

That was it. I was done. Being a newspaper reporter in those days was no glamor job. I remember my father kept asking me when I was going to get a job he could tell his friends about - having a daughter who was a reporter was embarrassing. Lois Lane and Helen Thomas - that was it as far as the public knew - for female reporters. But, I liked the investigative bits. I loved being in the know and having a license to be nosey. However, honestly, I wasn't that good. And $29,000??!! NFW.

Three months later, I was selling office equipment for IBM. My starting salary, before commissions was $18,000. My first year, I made $30,000.

So, thanks, Helen... Happy birthday. I hope you got a raise. 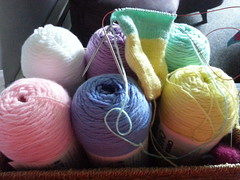 The big bench that had housed the second litter box had finished airing out on the terrace ...  My plan was to use it for spare blankets and quilts which I have a lot of. I have so many because I love giving my bed different looks and since I don't have a good place to keep them, I forget I have them and buy more.  Plus one of the places I stored them was as extra bedding under the spread on the fish bed which made it very difficult to add air to which is pretty important since it's an air bed...

So.  I moved the bench into the fish room and proceeded to fill it.  I was delighted to discover that it had plenty of room to store everything I wanted in an orderly fashion plus it does not look bad in there at all AND I can finally get air back into my air mattress, plus easily pluck it into the living room or terrace if it gets too hot to sleep in my bedroom.

In the process of tracking down all the quilts, covers and bedspreads, I found a treasure.

Way way back in the very early 2000's, I made a wallhanging out of my favorite t-shirts. It hung over my bed.

Sheri, the designer I hired to make my home beautiful could not get rid of it fast enough but I hid it.  Until today, I could not have told you where!

I am going to find a new home for it. I have an idea but I want a consult with my neighbor before I decide.  She is a master of creative ways to hang shit so I'm going to get her ideas before I do anything.  But it is absolutely going up someplace where I can enjoy it every day. It is a rich history of my past and I love it.  I took three close up pictures. 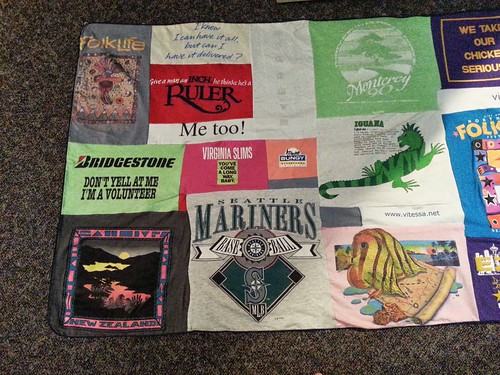 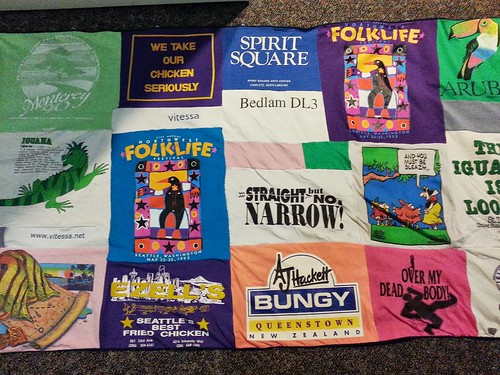 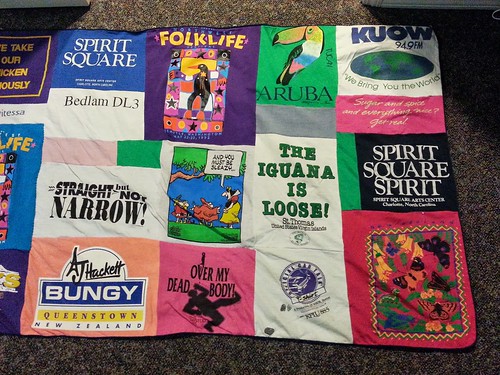 And, meanwhile, I'm not sure I have ever seen a better candidate for a 'before' picture than that sad sack from my pre-2005 bedroom.  Yikes!!

And, in other news, Zoey is driving me nuts.  When I got home today she was all over me.  She had to be petted and hugged and scratched and loved.  I gave her some food and all she wanted was attention.  She played with the Bolt laser thing for a while and helped me with my project and now is back to demanding attention.  I got her and love her because she is so loving but yikes! I'm being loved to death today!
Collapse