I have now been retired for 10 months.  Nearly a year.  I've gotten used to it in many but not all ways.  I still see jobs available that I think would be interesting and fun and then I realize that they probably want me to go in everyday, all day.  Or they would want me to dress.  Or some other silly requirement that then leads to thankgod I don't have to.  And I knit another bear.

My days have turned out to be rather free flowing planless things.  I still have huge pangs of feeling like I'm wasting time, like I should be doing something productive.  But, I get over them.

Most days are anchored by the pool.  On weekdays, it does not open until 11 and on days when there are no classes, I try to be there at 11.  On Tuesdays and Thursdays, I have class at noon.  It's kind of nice to have an anchor and it's particularly nice to have the kind of anchor that I can toss overboard on any given day if I like.  On non class days, no one would even notice.

On the project lists are closet clean outs.  I have two on the terrace and two in the bedroom.  They really need me to replicate what I did in the living room this weekend.  Haul it all out, purge and put back.  I probably won't do it as thoroughly but I will do it.  The outside ones are dusty and dirty and will bother my breathing so I need to wear a mask. And I need to do them before it gets too hot.

But, I'm not going to do any of them today or even this week.  (I'm thinking maybe I'll do the outside ones on the next cook day - I hate sitting around doing nothing while Anita cooks.)

Today's mini project is to fix a cable in the kitchen.  It's been sitting in one of those cord hiders but the hider tore away from the wall it was stuck to and so the paint needs to be patched and a new cord hider installed.  And the same needs to be done in the front room but no paint patch needed.  The cord hide is just a rigid strip that the cable or cord goes through that sticks to the wall or baseboard to keep things tidy.  Only apparently the sticky only lasts so long.  They are cheap.  No biggie to replace.

Wow... I just read a tweet that Seattle home prices are up 10.6 per cent in the past 12 months.  Wow.  Several folks here are doing up their units for sale. There have been none on the market now for a couple of months. They should do well. 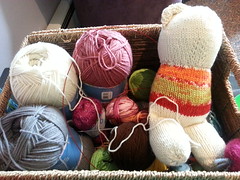 I finally got my workout from Alvin today. It's in kind of swimmer shorthand so even with big print, it fits on a card a little bigger than a business card.  I want it on the edge of the pool so I can refer to it.  Yeah, I could have slapped it into a baggie.  But, I have 1. time and 2. office supplies and 3. a little ocd-ishness.

So I opened up my newly organized cupboard and found an old IBM punch card. I cut out the workouts - 2 or them- 1 front and 1 back.  and 'laminated them onto the card with packing tape.  Then the big find.  I had not tossed out a little bag of convention lanyard, card holder things that I should have.  I found that and dug out a clear plastic card holder. I slipped the laminated card into the holder. I found the hole punch (in the 'fastener' drawer with the stapler, staples, tape and paperclips - heaven!!!) and punched a hole in the top and fastened on a Mariners lanyard and I am totally good to go!!!

I can prop it up on the edge of the pool or hang it on my bag and dangle it over the edge - all kinds of options.

Hilarious because it's really simple and I'll have it memorized after a couple of times but I feel accomplished. 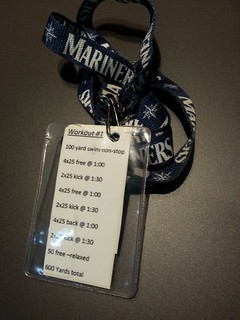 I also got the painting fix done and the cables all safely and tidily into their covers again.  I just love having so much time that getting the little shit done is fun.
Collapse