I should have gone swimming this morning but I really don't like that backup class and I also don't like going when I don't want to.  It turns out that swimming is such good exercise that I really really don't want it to become a chore. I love it and I don't want to ruin that.  I don't want 'should' to replace 'get to'.  Next Saturday, my regular Saturday pool will be open again and with my peops and the good instructor.  I'm looking forward to that!

I'm going to be out of the house for about 10-12 hours today.  I wonder what Zoe will get into.  She's been pretty good.  I had to move a plant and there's another in jeopardy. Last night she knocked a plug out of the socket or at least I think she did. It was a webcam and this morning the plug was on the floor - no other possibles I can think of.

She really is so energetic and enjoys diversion.  She was underwhelmed with the Bolt laser toy at first but now quite likes it and will chase that sucker for the whole 15 minutes until it turns off.  I should run it a couple of times before I go maybe I'll wear her out and she'll nap while I'm gone.

I know Betty will. Betty will worry about dinner.  Zoe really does not eat that much.  So little, in fact, I'm wondering if I should worry.

It's supposed to be sunny and  warm today which means hot in my book, probably.  I'm hoping it means people will be out doing outdoor stuff and not in the places where I am and the sun glare won't send me over a guardrail!

I've got a couple of hours before I want to head out. I think I'll get up and get dressed and get the kitchen tidy and then play with the cats. 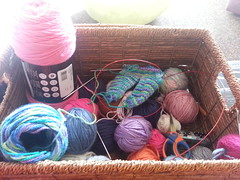 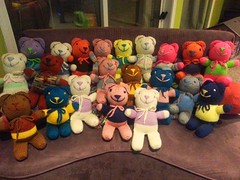 yeah, it's a day early but the green chair couldn't take any more.

I now know how to train for CES. Get in the car, head south, stop at 42 gillion places, walk around. Stop at IKEA and walk through that mof*cker and then walk to dinner and then go to a concert. My feet gave out just after IKEA, actually. Note to self, bring two pair next time. Seriously, ouch. I finally stopped at Marshall's and bought a pair of flip flops. They felt terrible but it was a new terrible...

I got everything on my list except yarn (Walmart does not, apparently, carry what I wanted any more) and more actually and didn't even spend what I thought I would. I even found better pumpkin for Betty. Cheaper and easier can to open. Score.

But man, my ankles give cankles a bad name tonight and the bottoms of my feet are shredded.

The concert was fun. It was actually a dress rehearsal so it was cheap and interesting and really fun. I loved all the singing. The musicians were too loud (they will be in the pit for the real thing so probably not an issue). They had several sets of dancers. One was excellent and the choreography was outstanding. The rest sucked but I'm not a big fan of dance. I just wanted the singing.

But probably the more interesting thing was the guy I sat next to. As we were filing in, this guy and his wife were right in front of me and he turned around and said 'did I see you get out of a Smart Car?' and so we chatted about Smart cars until we found seats and then we really got into it. Turns out he is Adam Woog who has, for as long as I've been in town, written a monthly column for the Seattle Times on the latest mystery books! It is really the only thing left I actually read in the Times any more. And there he was sitting right next to me. It was a hoot. Quite made my evening.

I let GPS take me home. It was a little tricky to get on the right road and then there was no one on it but me which was a little disconcerting. But, at one point I could see the main highway and it was bumper to bumper so I didn't care and then a couple of cars joined me so I felt better and soon I was home.

Betty had a little dinner and Zoe is doing some investigative work. I'm going to watch the news for about 15 minutes and then crash.
Collapse