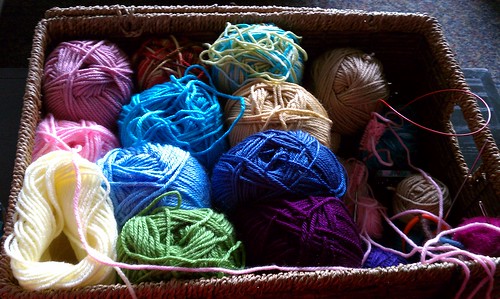 I got trained on my new project this morning and it's going to be fine. It's a new platform but, it turns out to be basically an old platform with new paint so intuitive. The project manager is one I've worked for before and she is great. It's all kinds of different than my other, now concurrent, project so that's actually kind of good, too.

Neighbor Ann came in with her technical issue du jour - she has a Nook and an emergency only flip phone. And, honestly, she's not going to get a speeding ticket but she is slowly but surely making progress.

She reminds me of my Mom's first computer. She bought a Radio Shack TRS way back in the day just 'to see what all this stuff is about'. She could not make heads or tails out of it, but she kept it up on her desk in the kitchen. Then one of her grandsons got big enough and he started playing with it and doing all kinds of things. She wanted him to teach her but every time he'd try, he'd 'show' her while doing and go too fast.

The rule was that he was not allowed to touch it while he was eating. And he had to wash his hands before he could.

Ann came in with her Nook saying the letters were too small. (We've changed font size a million times so I knew she could do it.) She tried to hand it to me and I put my hands behind my back and told her to do it. And sure enough with just a hint, she got it right off.

Swimming was good. The new kid was way better. He still annoys me but I think I just need to get used to his style.

My new table is coming tomorrow!! When they delivered my dining room table, it had a flaw in it. Not huge but certainly not acceptable. They agreed to replace it but had to order one and now it's here and it's coming tomorrow morning first thing.

About a year ago I had three bumps removed from my head. Now one of those fuckers is back! Not as big but maybe still growing. Pisses me off. I'm not going to have it removed this time - too expensive and too hurty.

machupicchu and I are going to Dine Out For Life tonight at Blue Moon burgers. It's a local chain. There's one near him we tried out a while back and loved and just never got back to. So Dine Out For Life is our excuse to go back. Only tonight we're going to a different link in the chain. We're spreading the love.

And... I need to get my shit together and out the door. I'm picking him up at work in the height of rush hour so no telling how long it will take me but probably way longer than I think.

***
I saw my very first lime green Smart Car (other than mine) tonight!! Love the vanity plate. It was parked in Fremont.