My brother shaved his face for his surgery and posted before and after on G+. I think he started growing his beard when he retired from the Navy and I'm not sure he's had it off since. I have to capture here for posterity. I actually can't stop staring.

Here are some from earlier years.

And the obligatory iconic from about 1955.

***
About every 6 months or so, Gmail goes through a few days of letting spam through the filter. The rest of the time it does a great job of keeping my emal spam free. I think, honestly, that it gives me these few days of Penile Enhancements and Nigerian Princes so that I will truly appreciate the hard scrubbing work the rest of the days... it's working as designed.

***
Ahhh since I never use windows full screen, I couldn't really understand what everyone was bitching about.... this kind of explains it.

That's what my brother told me last night when he was explaining why he had two surgeons. Amy, at his shop, just popped me a note that he is in ICU and resting and his son got to go in and say hi and said all was good.

His wife told me earlier that they put in a spinal drain as a precaution and that sounded uggy enough for me to google whereupon I found a great page all about the kind of surgery he had. It sounds like recovery might not horrible.

I had a lot of work this morning and a conference call at 1 pm. I did not need to be online for this conference call so I went to swim class and then sat in the car and called in. I waited 10 minutes with no action. I sent a text to the manager and got an instant response 'Oh, I canceled it, didn't you get the notice?' Er no, because as I had explained to her, I had a class and might even be late.

I came home, watched the end of the Mariner loss and waited for some stuff to come back from QA. When it didn't, I popped out again to the fabric shop.

I have two low credenzas in my hallway. Both of them have marks on their tops which drive me nuts. Neither are good enough to get redone properly. Sheri thought glass might be a good solution except then she discovered that it would cost about 3 times the price I paid for the pieces to start with.

So I thought of some kind of fabric/upholstery solution.

One of the credenzas is black. That turned out to be a very easy fix. I found some nice plethery kind of stuff that cut easily and needed no trim and even drapes over the edge gracefully. Problem solved!

The other is a faux light tan wood grain. The doors to it have frosted glass so I'm going to try a frosted window cling laid on top. If it does not work, I will have squandered $8. I'm willing to chance it. Amazon says it will be here Monday.

Still no return from QA so I guess I'll go do something else productive.

Here's my new room. So far... It's missing the stained glass window but that will be a whole nother set o' pix. 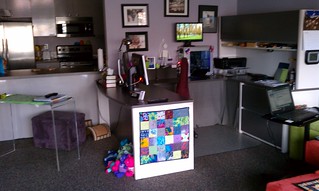 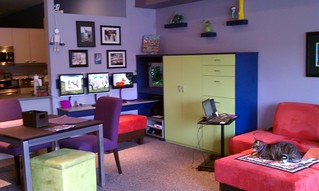 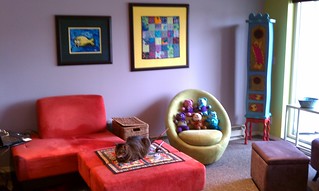 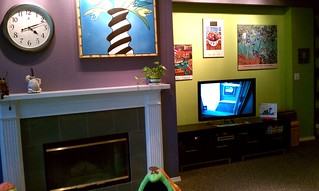 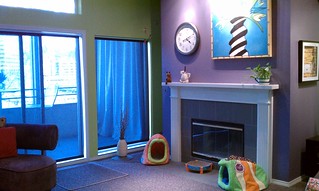 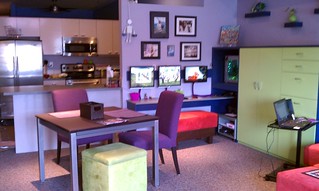 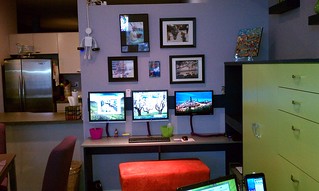 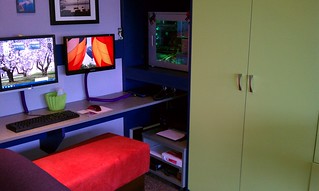 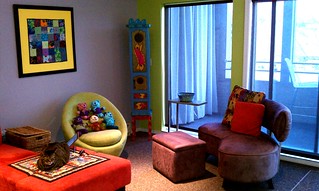 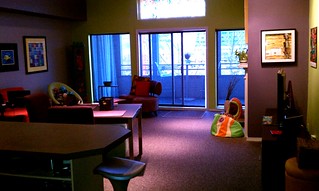 It's perfect for me.
Collapse