Today, Jeff, the handy man/installer will be finished. And his stuff will all be gone. 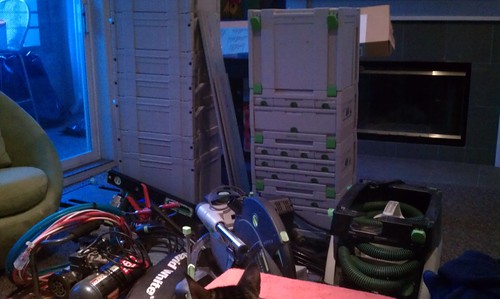 I'll be able to put stuff into my new furniture.

I won't be able to hook up the computers and printer because the outlets still need to be installed. The electrician will come to do that tomorrow.

But, I should be able to clear out the bedroom and turn it from a storage/staging area to my bedroom again.

I really honestly feel like today may be the beginning of the end of all this mess.

***
oh my Google black bar just got the store (Google Play) and all the stuff I need and use every day is still there. Thanks, G!

Much has been done.

One huge thing is my new bedside table. Sadly, I have no before picture. There was a gray 3 door night stand with a broken kick plate and a snake pile of cables on the floor next to it. Every time I reached for anything, it got snagged on cables.

Jeff put together the shelf for me... 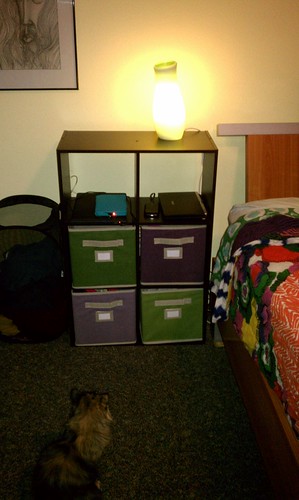 I love it. I might get some kind of rack so the technology can all live in one cube but I might not. I might love it just the way it is.

Sheri and Jeff are in the living room stuck on some issue. Apparently he needs yet another tool to finish drilling the holes to shoot the cords through...

I'm ready for them to finish up and get out. But not yet all caps desperate.

***
Before Decide.com was born, I got to give it a test drive/user test and I loved it from day -45. Now they've added home appliances to their list o' stuff they price out for you. It's just fun to operate. Especially if you have on your buying pants.

Finally they were out of here at 5:15. I was really seconds away from losing it. From about 11 am until 5:15, they really just piddled around. According to the pace of a couple of days ago, they could have been out of here by 1 pm. But, no... let's just take as long as we possible can... ARUGH.

Sheri and the electrician will be back tomorrow. She says the electrician says he will be here between 10 and 10:30 which even Sheri acknowledges will be probably noon. At least he's a fast worker.

Meanwhile work stayed on my ass all damn day and there is plenty queued up for tomorrow.

I never got any lunch and... for the first time since last August, I was an unannounced no show in swim class. And I probably won't get to go tomorrow either.

The stuff, so far, looks really great. I do love it. A lot.

Meanwhile, I have a new TiVo coming on Thursday. It's going to replace one currently in service. I could, conceivably have both the new one and the old one working at the same time but it's a major PIA. So, I'm cleaning off the one that is retiring. I think by Thursday, I'll have it done! I watched some and transferred the rest. The transferring takes forever. I'm glad I started last week. All the critical stuff is done. If I don't get the rest, that's ok.

I'm too tired to figure out what I want for dinner. Maybe I'll get inspired on the way to the kitchen.