It's amazing how well and how long you can sleep when there are not cats landing on you, poking you, or running across you. Wow. I slept nearly 12 uninterrupted hours.

I can order coffee delivered to my room and it will be here in 20 minutes (and cost me $25) or I can shower and get dressed and go find breakfast. I'm going with door number 2.

***
Line to get on the monorail is already long! the upside is that this is the first stop so the train will be empty

***
Monorail on a scooter is interesting... One missed stop (couldn't get out in time) and 3 different elevators to get to the ground... But I'm here!!

***
Testing the connection again.. Updates may have to wait

***
For +Brigitte Lichtenberger ... This is THE scooter! What would you call it thee?

I only forgot one thing. Sunglasses And YIKES is Las Vegas a bitch without them... inside, not so much but once you get outside... So, on the way to dinner tonight, there will be sunglasses purchased. I assure you.

This morning started out with breakfast. An unsatisfactory event. There are 2 whole places and 2 half places to eat breakfast at the hotel. 1. regular restaurant 2. a giant all you can eat buffet 3. MacDonald's and 4. your room. 2. is way way to much food but my brother and I gave it a go last year and it was yummy and impressive. So I tried 1 this morning. We also tried it last year and I don't remember its being a problem but this morning the service sucked and the food was worse. I don't have to try that again.

Plus, I was kind of feeling sorry for myself and wondering if coming here on my own by myself was even a good idea. poopoo me.

But, I ventured on. The scooter and I are getting to be friends but it still gives me heart attacks now and again. The monorail provided once such opportunity. I couldn't get off of it in time so I just rode to the next stop which had far far fewer people and then rode back. Now I know just to pull in directly, stop, and then back out when you get there. My backing out isn't the greatest but it's getting better.

Nokia had cute dudes serving coffee and handing out screen cleaners at the monorail station. I appreciated both very much.

You have to take 3 different elevators to get from the monorail to the ground. But it was fine. I pulled into my first spot. The one building with most of what I wanted to see in it, and decided to park the scooter and walk. I parked next to the TWIT broadcast booth - right behind where Leo Laporte was sitting. That tickled me.

Then I walked the show floor. This would have been fine except after an hour I was spent. I could walk no more and I was totally lost. I had tried to pay attention and walk smart but I failed. I finally made it back to the scooter and did not park it again. I feel badly taking up so much space but I got over that. People were cool about it and there were a fair number of other scooterists there so it was ok.

Once I got on the show floor I totally lost my poopoo me. It was glorious. Amazing. Wonderful and wow. I mean really.

This guy was one of the first I talked to. He was probably 50 and very handsome with a cool British accent and delightful patter. And he also got my vote for best cufflinks ever. He also had a cool product line - http://www.myinnergie.com/home.aspx 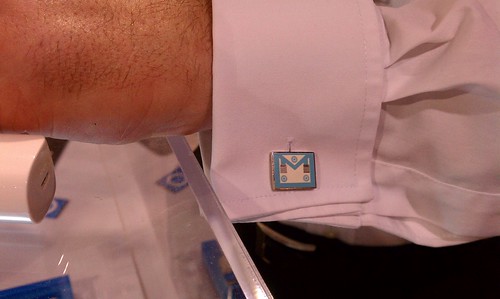 There were several booths of massage chairs and every one I saw was occupied. Like these. 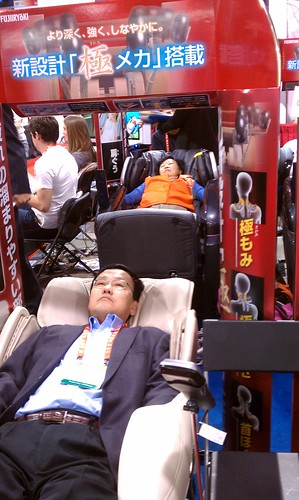 There were booth babes with pink and blue sparkly hair. 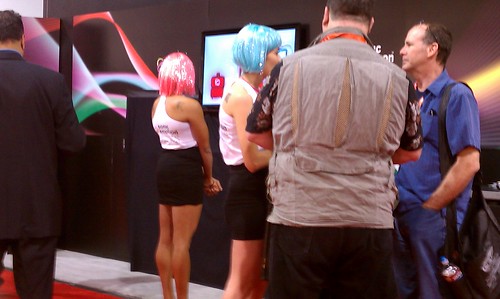 I saw these awesome chairs. I would love to have one. 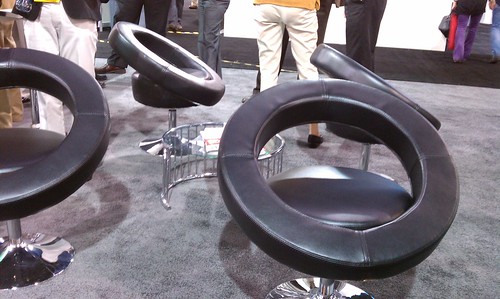 This is an 11 second video of dancing robots. They aren't Rumba's but some other brand. When I first walked up, all three were dancing in unison - it was hilarious. But then one quit - got tired, I guess.


I saw one booth that featured a snazzy looking router. Turned out to be an outfit called Buffalo. I told the guy I was looking for speed and uptime and he told me the router had great range (way to listen, dude). I asked him for a card or brochure so I could remember the brand name when I got home. After much ado, he finally came up with a card. He was not a kid but clearly not trade show trained.

I wandered around and saw stuff for about 5 hours and then came back to the hotel. I'm undecided on plans for tomorrow. Right now, top of the list is hitting the sidewalk and scootering it down to the Vanetian. There's lots of show stuff there. And I'll have sun glasses.

I have my show tickets to O tomorrow night - at the Ballagio which I think is pretty darned scooterable from here.

My flight home isn't until 3:25 so I'll have time on Thursday to do the other building at the convention center if I don't get to it tomorrow.

Tonight I'm using the hotel's wired connection which is marginally better than its wifi. For some reason, tonight, the cellphone reception is sucking worse than the wifi.

I think now is a good time to go find some sunglasses and dinner.

***
I have always wanted to try an outback steakhouse and so here I are ! With a view.

***
And the cell reception in this place is fabulous!

***
This may be the best whiskey sour ever made

***
sunglasses procured... i'm totally ready for daylight. i plugged $20 into a slot machine and got bored before I used it up. i am such a high roller. and a party girl. i'm in now for a rousing evening of reading and futzing and resting up for tomorrow.
c'est la vie in LV.
Collapse